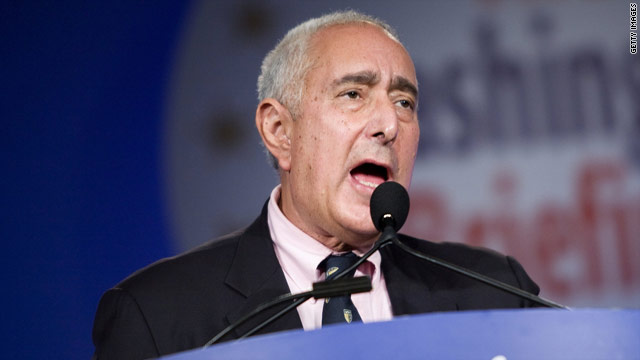 Actor Ben Stein, above, is not a fan of Republican Joe Miller, who is hoping to become an Alaska senator.
STORY HIGHLIGHTS

(CNN) -- As Election Day gets closer, the rhetoric gets more intense, interesting and, shall we say, passionate. Here are some things you might have missed.

Ben Stein -- famous for his role in the '80s movie classic "Ferris Bueller's Day Off" and his political/economic commentary -- took to the pages of the Alaska Dispatch to blast Tea Party-backed Republican Senate candidate Joe Miller, calling him a "dangerous, stupid clown."

Tell us how you really feel

Frank Caprio, the Democrat running to become Rhode Island's next governor, did not hold back his anger when it was reported that President Obama would not endorse him. He said in a radio interview, "He can take his endorsement and really shove it as far as I'm concerned."

Gov. Joe Manchin, the Democrat running for West Virginia's Senate seat, issued a stern warning for the president when asked whether he should be re-elected, saying "Things have got to change."

The magic of Photoshop

Video: Rent is too damn high

A new television ad is under fire for a photo of Rep. Mark Schauer, D-Michigan, and House Speaker Nancy Pelosi. The problem? Schauer's campaign says his rival, Republican Tim Walberg, Photoshopped two people out of the photo making it appear as though the Democrat and Pelosi were arm-in-arm.

If Senate Majority Leader Harry Reid fails to win re-election, he may have a backup plan: as a contestant on ABC's "Dancing With The Stars."

The New York Post reports that Obama's strategists are eyeing rapper Jay-Z to campaign for the president as 2012 approaches. The targeted demographic: the youth and minority vote.

The Boss opens his wallet

Bruce Springsteen has decided to jump into the 2010 race by donating $2,400 to a fellow rocker taking the political plunge: John Hall, a former member of the band Orleans.

"Saturday Night Live" parodies you. The latest person to feel the love is New York gubernatorial candidate Jimmy McMillan, running for the "Rent Is Too Damn High" party. Actor Keenan Thompson gets two gloves up from critics.