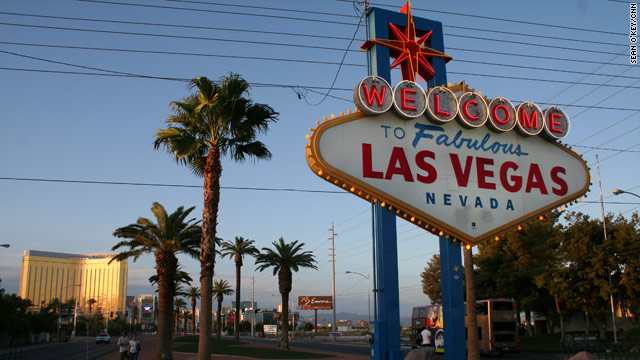 Washington (CNN) -- Pick up a television remote control in your Las Vegas, Nevada, hotel room today and you are guaranteed to find a program to teach you how to play craps, blackjack and roulette as well as be inundated with 30-second messages about who to vote for in the Nov. 2 election.

Wait, who to vote for? That's correct.

The television airwaves in Las Vegas are so saturated with political TV commercials that in the past week alone, these ads took up 180,600 seconds or 3,010 minutes, according to a new analysis of TV ads for CNN by Campaign Media Analysis Group.

To boil it down into a more recognizable number, more than 50 hours was dedicated to TV commercials on Las Vegas stations in the last seven days, said Evan Tracey, CMAG's president and CNN's consultant on TV advertising.

An astonishing figure, yes, but when you pause it suddenly makes sense.

After all, the battle for control of Congress is being waged in this Western state where Senate Majority Leader Harry Reid is fighting for his political life and Republicans have a very good shot of defeating a Democratic incumbent in its march to try and retake the House majority. Add in the race for governor and other state offices and the airwaves quickly become cluttered with political TV commercials. And Tracey noted that seven in 10 commercials currently running on Las Vegas airwaves are negative.

What is happening in Las Vegas is playing out in cities across the country such as Portland, Oregon; Orlando and Tampa, Florida; Denver, Colorado; Cleveland, Ohio; and Sacramento and Los Angeles, California. These are all media markets where more than 5,000 political ads ran on TV stations in the past week.

"This is crunch time for politicians as they start to try and reach the all important independent and late deciding voters who will determine the outcomes of close races," Tracey said. "Even though most voters are locked in for one candidate there are still a significant percentage of people just tuning in and deciding who to vote for."

But does this saturation help? Won't voters turn off and tune out? Maybe so, but you still have to have skin in the game.

"Even though there is tremendous waste in this on return for investment, it is right now influencing the undecided voters who will decide these close elections," Tracey contended. "Politics is still the only business that spends the most amount of money and has the least amount of people to influence."

Now, to really give you an even bigger mind-boggling figure: $182 million was spent on television ads for federal, local and state races combined in the past week. This was a 17 percent increase from the prior week.

And if that doesn't surprise you, check this out: Tracey predicts that by year's end -- the final spending figure for all political and issue TV advertising in the 2010 midterm elections will exceed $3 billion. Just in time for the start of the 2012 presidential race.

Remember, the first commercial of the 2008 presidential contest was aired in December 2006 by then-Rep. Duncan Hunter, R-California.