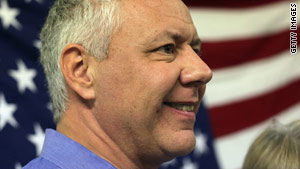 Washington (CNN) -- Colorado voters have a clear choice in the state's upcoming Senate election, as demonstrated by a nationally televised debate Sunday.

Republican Ken Buck, a conservative backed by the Tea Party movement, said in the debate broadcast on the NBC program "Meet the Press" that homosexuality is a choice and that he favors a constitutional amendment requiring a balanced budget.

Buck's opponent, Democratic Sen. Michael Bennet, said the stimulus bill he voted for prevented a second Great Depression, and that some troops must come home from Afghanistan next year.

At the same time, the dueling candidates showed some moderation on key issues.

Buck joined with Republican leaders in seeking the extension of all the Bush-era tax cuts. However, he said the cost of such an extension, estimated at up to $4 trillion over 10 years, should be offset by spending cuts, but he didn't offer any specifics.

Bennet, meanwhile, said he favored a one-year extension of all the tax cuts to figure out how to pay for them. That differs from Democratic leaders, including Obama, who oppose extending the cuts for the wealthiest 2 percent of Americans.

"You grow government because, as people have more money, they spend the money and government grows," Buck said.

"When we put people back to work, government grows; we increase revenue and we decrease unemployment benefits."

Bennet said he didn't understand what Buck meant, adding: "I'm definitely not interested in growing government, I can tell you that."

Both men were calm, but each leveled sharp attacks on the other that reflected a close race with polls showing Buck slightly ahead with just over two weeks before voting day.

When Buck said he believed homosexuality was a choice, Bennet responded that such a view was outside the American mainstream.

Bennet also accused Buck of easing some of his more extreme stances, such as privatizing Social Security and eliminating the federal Department of Education, since his primary victory over a mainstream Republican candidate. Bennet noted that consistency of wording can be difficult at multiple functions in the heat of a campaign, but added that "the flip-flops in this race are unbelievable."

According to Buck, Bennet is another Democratic big spender in Washington who claims moderate positions but doesn't follow through. For example, he said, Bennet says he opposes earmarks but didn't vote for proposals to stop the practice.

"Sen. Bennet does one thing in Washington, D.C., and then comes back in Colorado and talks about a completely different thing," Buck said.

Bennet was appointed to the Senate to fill the seat formerly held by Ken Salazar, who became Obama's interior secretary in 2009.