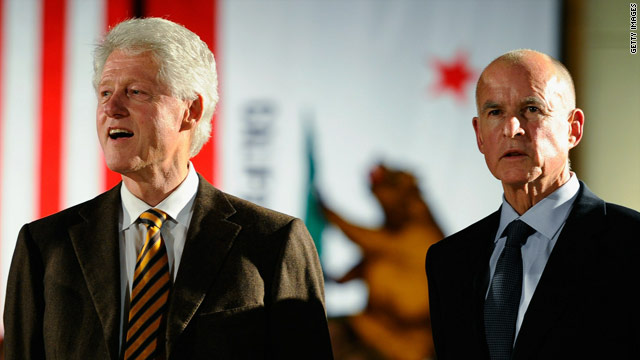 Los Angeles, California (CNN) -- Talk about burying the hatchet. When former President Bill Clinton turned out to rally for California Democratic gubernatorial nominee Jerry Brown on Friday night, the former rivals hugged and made up. Really, they embraced.

The two have a bitter political history dating to 1992, when they ran against each other in the Democratic presidential primary.

Back then, Brown earned Clinton's animus by refusing to drop out until well after it was clear Clinton had locked up the nomination.

Speaking before a crowd on the campus of the University of California, Los Angeles, Brown heaped praise on the former president.

"Let me tell you about President Clinton. I don't need to say much. Not only was he great in office, but he has been great after he left office," Brown said. "He didn't retire to Palm Springs to play golf, he's out there doing stuff. He's helping people in Haiti. He's fighting AIDS."

Video: Why the California race matters

Video: Clinton instead of Obama?

He cheered the former president for "motivating ... the highest angles of our spirit."

Clinton returned the favor, telling the crowd of screaming students, "I've known Jerry Brown for almost 35 years. When we were governors together, we strongly supported to push for green energy ... he knew it was good economics when most people thought it was a fools errand."

Reviewing Brown's history as a two-term California governor, then mayor of Oakland and now attorney general, he enthused, "I watched him consistently choose the future over the present, but not take a meat axe to the present" insisting "that's what you need now."

Brown is in a tight race with former eBay CEO Meg Whitman, who has funded her campaign with more than $119 million of her own money.

It was Whitman who first brought Clinton into this race -- when she ran an ad featuring old footage of then-Gov. Clinton ripping into Brown during the 1992 campaign.

A clearly irked Brown responded by making a snarky remark about Clinton's honesty and tossing in a reference to the affair with Monica Lewinsky.

Brown later said he called Clinton's office to apologize and the former president announced plans to endorse his old rival.

There were times during Clinton's speech that Brown seemed to lose patience, staring at the ground or stonily straight ahead.

But there were no openly tense moments.

For most of his remarks, the former president talked about the economy, accusing Republicans of digging America into a fiscal ditch and insisting "the last thing you want to do is put the shovel brigade back in the hole."

He made a special appeal to the crowd of mostly college students, imploring them "if young people vote as the same percentage of the electorate they did two years ago, then the good guys win."

He also gave praise to the other candidate on the stage, lieutenant governor hopeful Gavin Newsom, who is a Clinton friend and a supporter of Hillary Clinton's candidacy during the last election.

But Clinton offered a special compliment for Brown.

"He's the only politician in America I've heard say this except me" and went on to insist that "as horrible" as the recession has been "when we come out of it, if we learn right lessons from it, we will be stronger for it."

He criticized Whitman's policy positions and closed with a Brown endorsement saying, "The candidates have radically different ideas: one will lead us to a brighter future and the other will lead us to a movie we've seen before."

When they left the stage, the former adversaries went their separate ways. Brown walked off while Clinton worked the ropeline, crossing through the barricade and into the crowd to shake hands with just about every waiting visitor.