Henry in the House: Rouse might stay a while 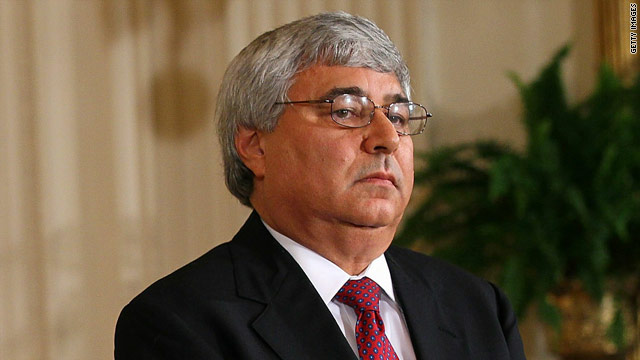 Washington (CNN) -- Pete Rouse was supposed to be the "interim" White House chief of staff, but an increasing number of senior Democrats inside and outside the White House are telling me it's looking more and more likely that he will stay on a more permanent basis -- maybe even through the 2012 election battle.

When President Obama officially announced Rahm Emanuel's exit on October 1, he said in the East Room, "I am very fortunate to be able to hand the baton to my wise, skillful and longtime counselor, Pete Rouse.

"Pete, who has more than 30 years of experience in public service, will serve as interim chief of staff as we enter the next phase of our administration."

But two senior Democratic sources told me the president and Rouse have a private understanding that if both sides are satisfied with the arrangement, the new chief of staff can stay on longer than just a few months.

And in the early weeks of the new arrangement, it seems to be going smoothly. There is a comfort level for Obama since Rouse served well as his chief of staff in the Senate, and for other White House officials, he has brought some welcome calm compared with the frenetic pace of the Emanuel era.

"I think Pete is there for a very long time," one senior Democrat close to Rouse told me. "I'd be amazed six to eight months from now if he's not still there, and he may even be there through the re-elect" effort in 2012.

Another big factor that may keep Rouse around longer is that some of the leading candidates to replace Emanuel on a permanent basis are all settling into different high-profile jobs for the next two years of the Obama administration.

Phil Schiliro, the president's chief lobbyist on Capitol Hill, had been rumored to be a possible candidate for chief of staff. But senior Democratic sources say he may now be in line to replace Deputy Chief of Staff Jim Messina, who is widely expected to leave for Chicago, Illinois, early next year to help run the likely re-election bid.

Another prime candidate to become chief of staff, Tom Donilon, pulled himself out of the running. Donilon's real passion is foreign policy, so senior administration officials tell me he privately told Obama this month that he would prefer to become national security adviser.

There had always been a high probability that the national security adviser, retired Gen. Jim Jones, would be leaving soon, and sure enough, on October 8, Obama made it official by tapping Donilon to replace Jones.

Colleagues say the other person on the short list to become White House chief of staff, Ron Klain, is very happy serving as chief of staff to Vice President Joe Biden and is not angling to switch jobs.

There are some top Democrats who say that if the president takes a shellacking in the midterm election and loses both chambers of Congress, he could rethink the long-term Rouse scenario and instead bring in a graybeard like CIA Director Leon Panetta or John Podesta, two men who served as chief of staff in the Clinton administration.

While people close to both Panetta and Podesta have said they have no interest in coming back to their old job, a GOP tsunami would be an emergency for Democrats, and these loyalists might be hard-pressed to say no to the president under those circumstances.

On the other hand, Rouse allies note that his long tenure as chief of staff to then-Senate Majority Leader Tom Daschle, D-South Dakota, including when there was a 50-50 Senate, prepared him perfectly for helping the president navigate a closely divided Congress.

Despite those skills, there is always the possibility that the low-key Rouse will not want the limelight and will beg off sticking around. "Saturday Night Live" had some fun with Rouse over his shyness and fondness for cats after Obama teased him at his unveiling: "Pete has never seen a microphone or a TV camera that he likes."

But friends say that while Rouse likes to project the image of a worker bee who's too busy to have fun, they note that he also privately said he didn't want to become even the interim chief of staff. He gave in because he is committed to Obama, is genuinely happy working for him and would probably stay on as long as the president wants.

"He pretends to never enjoy anything," one Rouse friend told me with a laugh. "But I think he'll enjoy this, and he'll be in the job a long, long time."