Christine O'Donnell: How'd she do? 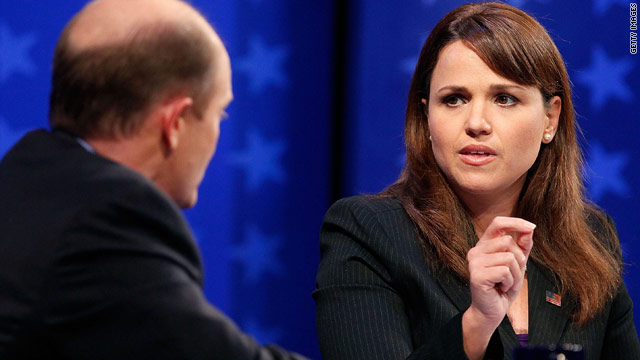 Washington (CNN) -- Before Wednesday's Delaware Senate debate, the bulk of what people knew about Republican candidate Christine O'Donnell came from clips from a talk show from the 1990s.

In the month since O'Donnell rocked the political world with her upset win over Rep. Mike Castle in the Republican primary, she's dominated headlines despite avoiding the national media.

Wednesday's debate, co-moderated by CNN's Wolf Blitzer and longtime Delaware news anchor Nancy Karibjanian, could prove to be make or break for O'Donnell's Senate bid. She and Democrat Chris Coons are vying to fill the seat held for nearly four decades by now-Vice President Joe Biden

The debate gave O'Donnell an opportunity to reintroduce herself to voters, define her views and chip away at the 19-point deficit she must overcome to defeat Coons. It also provided a chance to do the opposite.

O'Donnell and Coons focused largely on the economy and national issues during their 90-minute exchange.

O'Donnell threw rocks at Coons throughout the debate, while he tried to paint her answers as frivolous and unintelligible.

Video: O'Donnell: My faith has matured

Video: O'Donnell: I paid my own bills

"Coons can can barely contain his disdain for his opponent," noted Gloria Borger, a senior political analyst for CNN.

The debate produced a few humorous moments, such as when Coons said O'Donnell's well-publicized statements that she dabbled in witchcraft and questioned evolution theory were distractions instead of a substantive campaign issue.

"You're just jealous that you weren't on Saturday Night Live," O'Donnell said, referring to the comedy show's satirical skit about her.

"I'm dying to see who's going to play me," Coons responded with a smile.

The debate was tense and O'Donnell was feisty -- until a flub near the end.

O'Donnell was tripped up by the same question that caused problems for then-VP candidate Sarah Palin in her interview with Katie Couric about Supreme Court decisions.

Asked if she could name a recent Supreme Court case she disagreed with, O'Donnell said, "can you give me a specific one?"

O'Donnell was unable to provide a case, but said decisions she disagreed with would be posted on her website.

While the forum was one of the most anticipated events of the campaign season, not everyone was as captivated.

"Even if I lived in [Delaware,] I wouldn't watch. I already know about this woman to question everything she has done. Her ethics and character leave a lot to be desired," commented CNN reader Marie MD.

Commenter Laverne planned to tune in for the entertainment. "Anybody in their right mind will be able to tell right away if she is truly knowledgeable of the topics," the reader said.

Delaware voters had varying impressions of the debate.

Bob Ashby said O'Donnell did a good job showing who she really is.

"I think that Christine O'Donnell needed to show that she's a human being, a real person and that she's impassioned, that all this other sort of conversation that's been going on about her is not really accurate. And I think that's what she attempted to do, and I think she did very well with that," he said.

"I find it abundantly disconcerting that we have this much in common with Wasilla," she said. "Even if you have some concerns about Chris Coons' history or his politics or whatever, yet again, we have a polarized election where it's a black and white thing, because she is so far off the grid."

Another voter, identified by her first name only, said that after watching the debate, she decided she wasn't voting for either candidate.

"I just feel that Christine O'Donnell doesn't really answer any questions. She goes very circular on things. And I just feel like Chris Coons has been kind of condescending. And it's just I don't get a good feeling from either candidate," Meghan told CNN.

Immediate reaction from the blogosphere was also mixed.

The Conservative Journal said the debate "didn't have a clear cut winner as far as who answered better," but it predicted O'Donnell would benefit most.

The blog gave credit to both candidates for substantive answers, but was turned off by Coons' "snide retorts."

The left-leaning blog Talking Points Memo said that while O'Donnell may have mastered her talking points, she "had a tough time this evening with some basic questions about issues she'd face if she is elected to the Senate."

How do you think she did? Did O'Donnell win or lose votes based on her performance?