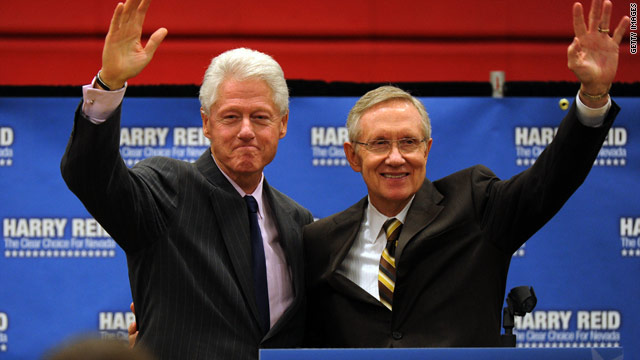 Polls show the race between Reid and Republican Sharron Angle neck and neck.

In his 40-minute speech, Clinton told the crowd "in a normal time ... Sen. Reid would be winning this race by 25 points especially for what his opponent has advocated."

As many Democrats have recently, the former president criticized the large number of third-party group television ads running in this midterm election.

A great majority of the organizations sponsoring those commercials are aligned with the Republican Party and don't have to disclose their donors.

Video: Clinton instead of Obama?

"My mamma raised me to be man enough to stand up and say who I was if I criticized someone else," he said. "There's a reason these people running these ads under phony committee names, because if you knew who was behind ads you would know they were not true. And they will make money if Republicans run Congress."

Clinton then went into a spirited defense of the four-term senator.

"I am here because he has been good for America," he said as he recounted some of Reid's accomplishments, including saving construction and teaching jobs, pushing stimulus funds to build infrastructure and getting Bank of America to halt all foreclosures after problems with faulty paperwork, a line which draw a lot of applause.

One of Reid's problems stems from the fact Nevada leads the nation in unemployment at 14.4 percent as well as foreclosures.

Clinton told the crowd that Reid has made job creation his top priority and pushed tax credits and legislation that will bring new energy jobs to the state.

He also ripped into Angle and pointed out previous comments she made saying it's not the job of a U.S. senator to bring new jobs and said she would kill some of the tax breaks that will benefit Nevada.

Clinton said he recognizes "people are frightened and confused and mad," but urged voters not to cast ballots based on emotions.

"People are saying I'm mad and just mad and want to throw people out. I'm old enough to say if you make a decision when you are mad, there is an 80 percent chance you are going to make a mistake."

Clinton urged voters not to abandon their anger but "channel it so they can think clearly."

The former president went after Republicans on their budget history, and reminded the audience he left office after his administration had delivered several budget surpluses.

"I just want to gag when they say they want to balance the budget," he said. "If they just kept my budget, we'd be out of debt for the first time since 1942."

In introducing Clinton, Reid lavished praise on him, saying "during those eight years as president, he led us through the most prosperous" time.

Reid only mentioned President Obama once when he talked about the fiscal "hole" he inherited from the George W. Bush administration. Reid assured the crowd the No. 1 issue on his mind as well as theirs is the stagnant economy.

"We all wish things were better," he said "They are getting better ... just not fast enough."

While the audience lept to its feet several times for the 42nd president, it was also excited to see three Los Angeles Lakers basketball players who were surprise guests. Forward Ron Artest was joined by two rookies. The team is playing a preseason game Wednesday in the city.

The Las Vegas is part of Clinton's weeklong cross-country campaign swing. On Monday, he stumped in Kentucky for Jack Conway, who is running for Senate. On the same day, he stopped in West Virginia for Gov. Joe Manchin, who is in a tight Senate race.

He heads back to his native Arkansas on Wednesday to campaign with Sen. Blanche Lincoln and finishes up Friday in California rallying support for Rep. Loretta Sanchez and California gubernatorial candidate Jerry Brown.