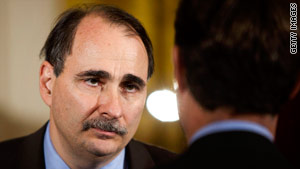 While saying he thought his party would retain its majority in both the House and Senate in the November 2 voting, Axelrod told the CBS program "Face The Nation" that that he hoped Republican gains would bring more cooperation.

He accused Republicans of deliberate obstruction as a political strategy since President Barack Obama took office last year with majorities in both the House and Senate.

"The posture of the Republican Party from the moment we got here has been basically to deprive the president of bipartisan support so they could accuse him of not being bipartisan," Axelrod said.

"So I'm hoping that with more seats, the Republicans will feel a greater sense of responsibility to work with us to solve some of these problems," he said.

"I think there will be areas where there's cooperation and areas where there's opposition," Gillespie said on the same program. "Look, the Republicans, if they take control of the House and get very close in the Senate, are going to try to put the brakes on all this reckless spending."

Gillespie said "common ground" was possible on a few issues such as free trade agreements, but maintained his focus on spending controls.

"If they can find some areas where you can get spending restraint with this administration, Republicans would be happy to go along with that," he said.