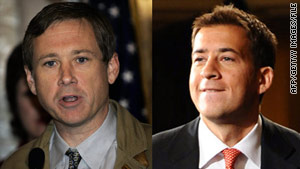 Washington (CNN) -- The two candidates vying for President Barack Obama's old Senate seat sat side-by-side and calmly accused each other of lying and other improprieties in a televised debate Sunday.

"We shouldn't be surprised the congressman is lying again," Democrat Alexi Giannoulias said to a claim of fiscal conservatism by his opponent, Republican Rep. Mark Kirk of Illinois.

For his part, Kirk said Giannoulias and his family's community bank loaned millions to mobsters and convicted felons before Giannoulias became Illinois state treasurer in 2006.

"He was the senior loan officer" for some of the questionable loans, Kirk said.

With the vote 23 days away, the debate on the NBC program "Meet The Press" provided national exposure to one of the most symbolic Senate races of 2010.

Democrats concede they will lose seats in the November elections, and are scrambling to keep hold of their majorities in both congressional chambers. Polls indicate the race is tight.

The loss of Obama's former Senate seat, held in the interim by Roland Burris, would illustrate the drop in support for the president and his party in the two years since his election as the nation's first African-American leader.

Republican strategist Karl Rove noted Sunday that Obama was in Chicago last week to campaign for Giannoulias, demonstrating the importance of the race to Democrats.

"It's a seat that should be easily in the Democrats' column," Rove said on "FOX News Sunday," and the fact the race is tight shows the problems facing Obama's party.

Such high stakes led to Sunday's spirited debate, in which both candidates staked out their positions and campaign identities while attacking the other.

Kirk hewed closely to GOP fiscal policy, calling for the extension of all Bush-era tax cuts scheduled to expire at the end of the year and arguing that spending cuts -- including whole programs he did not specify -- would balance the budget.

"The American way is a limited government and lower taxes and a very robust small business sector" that tends to provide jobs for minority workers, Kirk said. Democratic policies would bring a "European-style" system of high taxes, high debt and slow growth, he warned.

Kirk also said he would seek repeal of the health care reform bill and instead push for measures to prohibit government interference in the patient-doctor relationship and tort reform to cut down on malpractice lawsuits.

Giannoulias backed the proposal by Obama and Democratic leaders to extend the tax cuts only to people making up to $200,000 a year or families earning $250,000 while allowing the rates for income above those amounts to return to levels from the 1990s.

He also called for more tax breaks for small businesses and helping them get better access to credit as a way to create jobs. He opposed changes to eligibility for Social Security, saying he would prefer looking at increasing revenue from the tax on wages.

The fireworks came when the two men talked about each other's pasts and policies.

Giannoulias questioned how Kirk could call himself a fiscal hawk when he supported big government spending in the Bush administration and now backed extending the tax cuts to the wealthiest 2 percent of Americans at a cost of $700 billion over 10 years.

"The congressman has told some real whoppers in this campaign, but that might be the biggest one of all," Giannoulias said. "Saying you're a fiscal hawk doesn't necessarily make it true, and your voting record shows it's not true."

Kirk, a National Guard intelligence officer who has served in Iraq and Afghanistan, was on the defensive when questioned about false claims he had made about his military record.

He admitted the mistakes and noted he had come clean and apologized, saying, "I am completely accountable for this."

When asked about the loans by his family's Broadway Bank, which collapsed this year, to clients including Antoin "Tony" Rezko, who has pleaded guilty to wire fraud and corruption offenses, Giannoulias said banks first look at credit scores and credit-worthiness of clients first and can't always know everything else about them.

He acknowledged awareness of some questionable issues, saying: "We didn't know the extent of their activity."