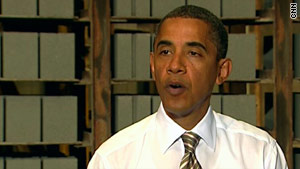 "We have to keep doing everything we can to accelerate this economy," President Obama said Friday.
STORY HIGHLIGHTS

The economy lost 95,000 jobs in September, though the private sector added 64,000 jobs. The nation's unemployment rate remained unchanged at 9.6 percent.

Obama blamed the net job loss on layoffs at both the U.S. Census and state and local governments. He slammed the GOP for opposing additional state assistance.

"We have to keep doing everything we can to accelerate this economy," he said during a visit to a Maryland brick and masonry company. Too many Americans have been "swept up in the most devastating recession of our lifetimes."

Obama highlighted the recently enacted small-business aid bill -- a measure opposed by many senior Republicans -- and renewed his push for a permanent extension of the Bush tax cuts for families making less than $250,000.

"The damage left by this recession is so deep that it's going to take a long time to get out," he said.

Republicans have repeatedly warned that a failure to extend all of the tax cuts -- including those for wealthier Americans -- will damage an already sluggish recovery. GOP leaders have also criticized the White House's economic recovery initiatives, claiming they've needlessly added to the debt while failing to sufficiently stimulate growth.

"With each passing month, and each new jobs report, it becomes increasingly clear that while massive Washington spending is growing the size of government, it's clearly not growing sustainable private-sector jobs," Senate Minority Leader Mitch McConnell, R-Kentucky, said in statement released before Obama's remarks.

"The trillion-dollar stimulus didn't live up to promises made by the Obama administration and Democrats in Congress; the massive growth of the federal government didn't result in a similar growth of jobs; and the maze of new regulations, health care mandates and taxes are having a predictable impact on the economy."