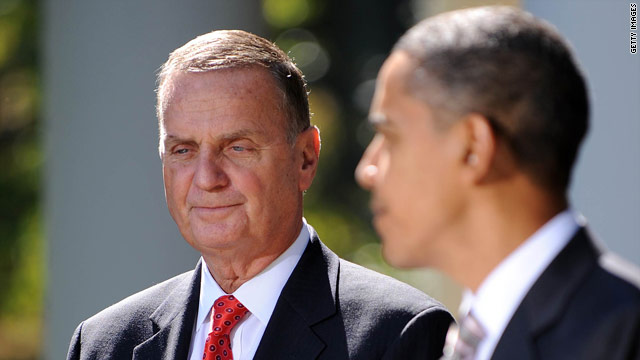 National Security Advisor Jim Jones was reportedly furious about how he is portrayed in Bob Woodward's new book.
STORY HIGHLIGHTS

Washington (CNN) -- When he got his hands on an advance copy of Bob Woodward's new book "Obama's Wars" before it hit stores and started reading it earlier this month, I'm told that White House National Security Adviser Jim Jones simply blew a gasket.

Jones was so furious about his portrayal in the book that the retired four-star general told friends later that he promptly took the book and mailed it back to Woodward, as if to say the book wasn't worth the paper it was printed on, according to a close friend of his who spoke to me on condition of anonymity because he was not authorized to discuss the national security adviser's private conversations.

When I pressed a senior administration official on whether or not Jones did in fact put the book in a box and mail it back to Woodward, the official simply said no comment, refusing to confirm or deny the postal service protest.

I spoke to Woodward several days ago, and he said he was not aware of Jones mailing the book back and was surprised to hear that Jones was so upset with his treatment in the book.

But the senior administration official flatly confirmed the claims of the Jones friend I spoke to that the national security adviser -- justifiably or not -- is indeed livid with Woodward and the controversy complicated an already difficult relationship he had with key White House colleagues.

Video: Jim Jones: I have enjoyed this immensely
RELATED TOPICS

The tension stems from the fact Woodward reported that Jones called some of his colleagues in the White House -- he clearly seemed to be aiming at top insiders like then-Chief of Staff Rahm Emanuel, senior adviser David Axelrod, and press secretary Robert Gibbs -- the "water bugs," the "Politburo," and the "Mafia" who were out to get him from day one of the administration.

Sure, it was common knowledge within the administration that Jones never quite clicked with the upper echelon of the White House staff. There were snotty whispers to blogs and big newspapers last year about how colleagues thought Jones was basically lazy and was probably going to get pushed out early in the administration.

Jones survived in part because he always maintained a respectful relationship with the president and had strong allies in Vice President Joe Biden and Secretary of State Hillary Clinton, according to senior officials. But once he was quoted lashing out at what he called the "campaign set" in the Woodward book and telling tales out of school about snubs he felt from the administration, a difficult situation became untenable.

Comments attributed to Jones in the book were a very sore subject inside the West Wing in recent days. When I called one senior administration official as I dug around on this column, he begged off any comment, using a musical reference to note the sensitivity.

There was the anecdote about how Emanuel refused to give Jones a copy of the inaugural address before it was delivered, and that Jones later complained to the chief of staff that he was always showering too much attention on his friend, Tom Donilon, who served as Jones' deputy.

"I'm the national security adviser," Jones allegedly told Emanuel. "When you come down there, come see me."

All of the inside chatter was too much for the "No-Drama Obama" insiders at the White House, and I'm told by people close to Jones that the controversy was basically the final straw that led to Jones officially stepping down Friday as national security adviser, with Donilon installed as his successor.

Jones is insisting to his friends that he was basically misquoted in the Woodward book, that he never uttered the insults that are attributed to him. But people inside the West Wing have had a hard time buying that claim for several reasons.

First of all, Woodward has a long track of accuracy dating back to his Watergate days with The Washington Post as well as more than two dozen books covering Democratic and Republican administrations.

And in this case, senior White House aides have largely embraced Woodward's latest book because they believe it's a portrait of a young commander-in-chief being tough enough to stand up to military leaders and question all of their scenarios for sending more troops into Afghanistan.

(Interesting to note that these same White House aides flatly rejected Woodward's claim on CNN earlier this week that the possibility of an Obama-Clinton presidential ticket is "on the table" as a possibility for 2012, but that's another story).

The other big problem Jones faces in trying to convince his colleagues that the Woodward book is wrong is the fact that the general himself is considered a longtime friend of the author who has been a source of inside information for Woodward before and seemed to cooperate with this book too.

In fact, Jones and Woodward traveled together to Afghanistan last year, giving the reporter an exclusive from the battlefield for The Washington Post as well as presumably some inside information for the book.

When I called Woodward several days ago for comment on whether he received a package from Jones, the author immediately noted they've been acquaintances for some 20 years.

That's why it's hard to tell if Jones really believes he was misquoted in the book, or whether he perhaps said too much to a friend and now regrets what wound up in the book and is going out of his way to tell friends that he had tossed the book out in order to dramatize his disgust and salvage a few more months on the job.

The official back story on the resignation I've been able to piece together from two people close to Jones is that after returning this week from an official trip to Germany and Russia, the national security adviser went in to the president and made it official that he'd like to leave his post at the end of the year. That wasn't really a shock because Jones had told Obama at the beginning that he would only commit to serving two years.

What was surprising to Jones intimates was that rather than giving him some time to set up a transition, White House officials quickly leaked word of the departure and the official announcement was made in the Rose Garden.

So Jones is now a lame duck, leaving some of his friends angry and feeling like he got the bum's rush -- a stark contrast to all of the smiles and warm words in the Rose Garden Friday afternoon.

"This is the final indignity from the Obama White House heaped on this distinguished public servant who devoted 40 years of active duty to his country in uniform," one close Jones friend told me. "He comes out of retirement at Obama's request. And from day one the sniping from the peanut gallery was incessant and the president and his senior staff did nothing to put a stop to it."