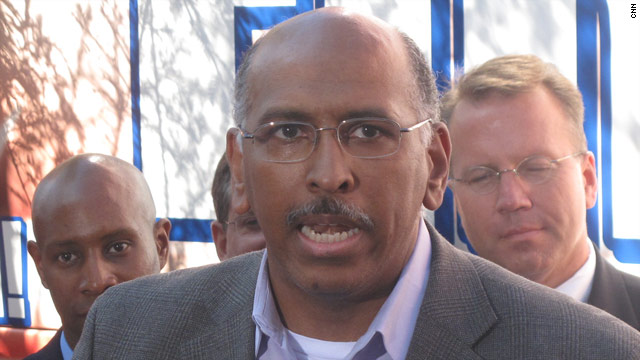 RNC Chairman Michael Steele says he wants to meet with President Obama and assess what they have achieved as African-Americans.
STORY HIGHLIGHTS

Washington (CNN) -- When the Norwegian Nobel Committee announced a year ago this month that President Obama would be awarded the Nobel Peace Prize, Michael Steele criticized the decision and pointedly asked what had Obama accomplished to deserve such a high honor?

It should come as no surprise then that Obama isn't clearing his schedule to find room for Steele, who would like to meet with the president to discuss what bonds, not what separates, these two political leaders. It is a request that dates to 2005, when Obama was first elected to the Senate.

Is there a chance that these two men, with opposite views on how to move the nation forward, could call a political timeout and together assess what they have achieved as African-Americans?

After all, Obama is the nation's first black president, while Steele is the first African-American to lead the RNC.

Cynics would argue the comparison between Obama and Steele is apples to oranges, and yes, in many ways that would be true.

But it is just as easy to recognize that these two men are trailblazers and role models for the next generation of black leaders.

"I think it is a very unique moment in our history," Steele said in a recent interview. "I think it is a very telling moment about how, as a nation, we've progressed from being water-hosed and locked up and denied access to the American Dream to leading the nation and in my case leading the opposition. It is humbling. I still look forward to a moment where the president and I can sit down and look at each other and just go, 'Man, OK. I'll picture you. You picture me. Can you believe this?' "

It seems like Steele would like his own beer summit with the president -- that famous July 2009 White House meeting on race between Cambridge, Massachusetts, Police Sgt. James Crowley and Harvard professor Henry Louis Gates Jr.

Steele is not publicly lobbying for the meeting, though, since Obama has turned him down before. He discussed the matter only when asked.

Five years ago, then-Maryland Lt. Gov. Steele sent word to then-Sen. Obama after he was elected to the U.S. Senate that he would like to set up a meeting. The message back from Obama's office, Steele said, was "the senator wasn't interested in talking."

Despite the snub, Steele said he still has "a standing request" for the meeting, because he emphasized that "for our community it's important for us to come together."

"We're just the tip of the iceberg," Steele said of the success he and Obama have achieved. "I mean ahead of us and behind us are generations of black men and women who are doing phenomenal things and yet what often happens is their efforts get overshadowed by the ... story of you know, some thug over there doing something bad," he said.

"Am I personally concerned about the lack of graduation, the poor graduation rates particularly among African-American males from high school? Absolutely. I look for those opportunities to support the minority-owned businesses, particularly black-owned businesses that have become hubs of generating what I like to call legacy wealth in the black community. So, there are some real opportunities."

But not everyone agrees with Steele's reasoning. Bryan Monroe, a professor at the Medill School of Journalism at Northwestern University, said while the two men might have some similar experiences, there is so much more that separates them.

"I think, certainly, they would have some shared interests to discuss on a personal or casual level," said Monroe, a former president of the National Association of Black Journalists. "But from a policy and political standpoint, Steele has represented a lot of what Obama has been rallying against over the past few months."

Monroe noted that it would be a mistake to assume that their race is a strong bond.

Shelby Steele, a senior fellow at the Hoover Institution at Stanford University, said the two men might find it "meaningful" on a personal level, because of "this sort of historical unexpectedness" that they both have achieved success at the same time.

And he noted that "it wouldn't hurt" for the two men to get together. But Shelby Steele, no relation to Michael Steele, noted that he didn't think the symbolism would have any real impact on the problems facing the black community.

"On a level of racial symbolism, the idea of two black men, who are in very high political positions, I have always been a little skeptical about that symbolism transferring into some sort of concrete advances in the black community," said the Hoover fellow Steele, who is often at odds with national black leaders for his conservative views on African-American empowerment.

"I think the problems in the black community are far more pronounced and more deep than symbolism can reach. It is not going to hurt things. But has the black high school dropout rate gone down since Obama has been president? The symbolism of a black man in the White House just doesn't carry."

Shelby Steele said that his comments should not be considered a criticism of Obama, but rather "just an observation of reality." "Are white kids inspired to do better, because we have had white presidents? Steele said. "Blacks are the same. I am sure they are proud of Obama. But problems in the black community are so deep. The income levels are low; the schools are not good." Shelby Steele added, "If the symbolism has any meaning here, it is that racism is in decline in America and is no longer an excuse for black underperformance."

Still, Michael Steele doesn't appear to be giving up on his idea the president will take him up on his offer for the meeting.

"Look, I can do the partisan thing all day long, but there is something important I think about the two of us talking face-to-face as well," Steele said.

As for when or if that will happen is anyone's guess. The White House did not return calls for comment on the RNC chairman's request.