9 years in Afghanistan: Experts see worldwide war with no end in sight 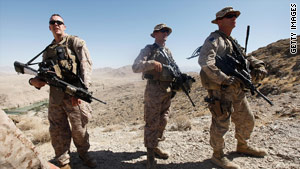 In the beginning, experts say, the Afghanistan war seemed straightforward, but nine years later, the end is not clear.
STORY HIGHLIGHTS

Washington (CNN) -- Watching the worst terrorist attack in the nation's history on a TV at CIA headquarters was like a punch in the stomach for Gary Schroen.

The 35-year veteran of the CIA had just entered the agency's retirement program when planes struck the Twin Towers in New York and the Pentagon on September 11, 2001.

Schroen's career had been spent mostly overseas as a covert officer in the Middle East and Southwest Asia. Now in his late 60s, he felt he was going to miss what could be the agency's biggest battle in a land he knew well.

Two days later he was at the forefront, summoned back to duty to lead the first U.S. team into Afghanistan. His mission: Hook up with the opposition Northern Alliance, help beat back the Taliban army and, as he was instructed by his CIA boss, "Find [Osama] bin Laden, kill him and bring his head back to the United States in a box on dry ice."

Schroen said it was clear "the gloves were off, that this was a war, and we were going to get the guys who did this terrible deed."

But nine years later, current and former intelligence officials tell CNN a battle targeted primarily in one region has spread to a worldwide fight with no end in sight.

Video: 'Leaving Afghanistan will be messy'

The elusive bin Laden is believed to be hiding somewhere along Pakistan's mountainous border with Afghanistan and a resurgent Taliban is causing havoc in Afghanistan. Al Qaeda affiliates and wannabes have sprung up and scattered, making their presence known in places like Yemen, Somalia, Northern Africa and even Europe and the United States.

A plan to wipe out al Qaeda initially prepared by the CIA during the closing days of the Clinton administration was revised and put into action by the Bush White House just days after 9/11. Former CIA official John McLaughlin, who was the deputy director at the time, called it "a very bold plan with a very bold objective" to destroy both al Qaeda and the Taliban in Afghanistan.

From his perch as CIA station chief in Islamabad, Pakistan, in 2001, Bob Grenier was concerned the United States would end up mired in an open-ended insurgent war like the Soviets did in the 1980s. But by early 2002, he had changed his mind.

"The war in 2001 went much better than I dared hoped it would. I thought we would be able to consolidate a victory, that this war was a new beginning for Afghanistan, and the Afghans would preclude a return of the Taliban," said Grenier, who is now a partner in a business consultancy.

"In the first year or so, I think we were very successful in the sense that the Taliban was banished, and al Qaeda fled -- chased them into Pakistan -- and in the next couple of years wrapped up most of their 9/11 era leadership, either captured or killed," he said.

But the situation changed on a number of fronts.

In March 2003, the United States invaded Iraq. Andy Johnson, the former staff director of the Senate Intelligence Committee, said resources were diverted from the unfinished business in South Asia.

"I don't think anybody can reasonably argue that the level of military and intelligence resources and reconstruction resources that were devoted to Iraq did not diminish our ability to seal the deal in Afghanistan, in Pakistan."

Grenier did not think it was so much an issue of resources but rather a lack of what he called command attention. He said, "As far as Washington was concerned, it [Afghanistan] was very much a side show. All of the real effort and thought was being put into Iraq."

A former senior intelligence official said the intelligence community was careful not to take away counterterrorism resources as it responded to the needs in Iraq. But the former official acknowledged the CIA does not have a lot of reserve capability.

Pakistan was always problematic. The current and former intelligence officials CNN spoke with agreed that the cooperation of Pakistani authorities was instrumental in helping track down many of the senior al Qaeda leadership who were captured or killed after they fled to Pakistan. Ramzi Binalshibh, who assisted some of the 9/11 hijackers, was captured in Karachi in September 2002. Six months later, 9/11 mastermind Khalid Sheikh Mohammed was taken into custody in Rawalpindi. Both men are being held by the United States at Guantanamo Bay, Cuba.

But Grenier said despite the success, it was becoming apparent that some of the suspected terrorists fleeing Afghanistan were finding a safe haven in the tribal areas of Pakistan near the Afghan border.

"It was something the Pakistanis were very reluctant to acknowledge simply because they were concerned about the prospect of triggering tribal warfare in those areas, if they tried to track down al Qaeda members in a heavy-handed manner."

"There's a duality to the problem with Pakistan," said former Deputy Director McLaughlin. "Pakistan has often been our best ally against al Qaeda even as its territory has provided safe harbor for this terrorist movement," he said, adding that the situation continues today.

The failure of the Pakistan government to take action led to the CIA use of unmanned aerial vehicles to fire missiles targeted at killing suspected militants operating out of the ungoverned areas of the country. That effort started during the Bush administration and has increased dramatically under President Obama.

The situation appeared to be going fairly well in Afghanistan for the first few years. Al Qaeda was driven out and the Taliban was routed. Elections were held. There was a new president in place. However, it became increasingly evident the Afghan government had little control beyond the capital of Kabul.

Grenier said the CIA could have done more.

"The CIA could have played a more prominent role in consolidating support behind responsible leaders, warlords if you will, in different parts of the country," Grenier said.

McLaughlin said Afghanistan began to be affected by the terrorist safe haven created across the border in Pakistan.

"The things that have turned Afghanistan into what it is today are essentially the safe havens along the border, which allowed the Taliban to eventually regroup, allowed al Qaeda to seek shelter there -- techniques they learned in Iraq migrating into the training camps in that area, migrating into Afghanistan."

The terrorist problem has become even more complex as militants in various parts of the world began to align with al Qaeda. Grenier said the overall war on terror and the U.S. invasion of Iraq may have contributed to the broadening of the problem.

"The measures taken to deal with extremism have had the unintended consequence of creating more -- and more cohesive -- militants."

Grenier says attacks from regional extremist groups like the bungled Times Square bombing would have been unthinkable just a few years ago.

McLaughlin said the terrorist movement today is harder to combat and confront because it is so diverse.

"You have to follow individuals in diverse little movements who hardly have names, because two or three of them might arm some lunatic to come here to set a bomb off in Times Square," McLaughlin said, referring to Faisal Shahzad, the man who bungled an attempt to set off a car bomb in New York.

A current U.S. intelligence official said the battle being waged by the intelligence community is causing the enemy to feel the heat.

But the efforts by the intelligence community and military to take the terrorists off the battlefield will not completely solve the problem.

"Radicalization is an issue to deal with. Strengthening counterterrorism laws in some countries is required," the intelligence official said.

Grenier said he believes that bin Laden's and other militants' safe haven in Pakistan will not be eliminated until those ungoverned areas are fully incorporated into Pakistan -- an effort he says will take a generation.

McLaughlin said terrorism can't be stamped out completely -- just like crime, it dates back to Biblical days.

"It ends when we get to a point where terrorism has shrunk to almost a nuisance level -- still there, but not having the impact in terms of deaths and destruction that it has today."

McLaughlin said it will take three things to get there: destroying the al Qaeda leadership, denying safe haven, and changing conditions that give rise to the movement -- the problems of education, unemployment and the Israeli-Arab conflict.

Former Senate staff member Johnson thinks the terrorism problem will diminish with a robust intelligence operation, which ensures "the flames of terror have been tamped down to the point they are embers and those embers are not allowed to flame again."

The U.S. intelligence official said it is tough to define victory.

"It's not Yorktown or Iwo Jima, where identifying the winners was easy," the official said. "Perhaps, from an American perspective, the best way to assess progress is to note the fact that there hasn't been a 9/11-style attack since that terrible day."

How does Schroen, who led the first team into Afghanistan after the 9/11 attacks, feel about not getting the perpetrators of 9/11?

"It's the only thing I regret in my long career with the CIA, that we didn't get Osama bin Laden in 2001 when we had a chance. That son of a bitch is out there still plotting to kill Americans."