Reid faces tough fight as he heads home to campaign 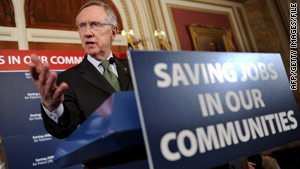 Senate Majority Leader Harry Reid is returning to his home state of Nevada on Tuesday to campaign.

Henderson, Nevada (CNN) -- It's one of the most closely watched Senate races in the country -- and for good reason. Majority Leader Harry Reid stands to lose his job representing Nevada -- one he's held since 1987 -- to Republican Sharron Angle, a Tea Party favorite.

It's a race too close to call. That's why Reid will have his work cut out for him when he returns to his home state Tuesday for some good old-fashioned campaigning.

A CNN/Time/Opinion Research Corp. poll released September 15 finds the race between Reid and Angle to be statistically deadlocked, with 42 percent of likely voters supporting Angle and 41 percent backing Reid.

"This election is very important to me," said Alfred Noble of Henderson, Nevada, a Las Vegas suburb. "I think Harry Reid is out of touch, and I think Sharron Angle is a little extreme, so I'm still up in the air about what to do."

Henderson is in Nevada's 3rd Congressional District, a swing district where "everything's going to come together," according to David Damore, a University of Nevada, Las Vegas, political science professor.

Video: Momentum swings back to Dems?

It seems even those in Henderson who support Reid haven't been 100 percent satisfied with his governing, but they said he's the lesser of two evils.

"I think he does need to focus a little more back on the state," said Brian Manore, "but I think he's done well, and I do not think that Sharron Angle is the answer."

Mary Ann Brim said she feels there's a "terrible, terrible hatred" in the air for Reid, but she said she isn't sure why. She said those who vote for Angle purely because they don't like Reid should reconsider.

"We stand to lose, I think, some power for the state," Brim said. "[Some people are] so determined to dump Harry that they don't realize that the alternative is very scary."

Brim said her dislike of Angle stems from, among other things, comments the candidate has made surrounding the elimination of Social Security and other government programs.

"It's like everybody is on the edge of rage, and it's driving them to decisions that just don't make sense," she added.

But Tracy Romano said she appreciates Angle's desire to shrink the federal bureaucracy. She said the candidate seems "real" and believes Angle when she says she'll go to Washington and lower taxes.

Not surprisingly, her opinions of Reid play a factor as well.

One thing that everyone seems to agree on though is that the economy is the most important issue come Election Day. Nevada is home to the highest unemployment rate in the nation (14.4 percent) and highest foreclosure rate.

Many associate the poor economy with the politicians in power and blame them for not fixing the problem. That view is Reid's biggest hurdle, and the Angle campaign's recent focus on immigration and health care -- as opposed to the economy -- is a bad move, according to Damore, the political science professor.

"Any day that [the Angle campaign] is not talking about the economy is a win for Harry Reid," Damore said.