Obama is the main theme of Kentucky Senate debate 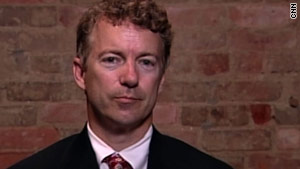 "I think this election really is about the president's agenda," GOP candidate Rand Paul says.

Rand Paul, the Tea Party backed Republican who beat a mainstream GOP opponent in the primary, accused Democratic nominee Jack Conway of hewing to Obama's agenda at the risk of the nation's economic stability.

Conway, the state's attorney general, said that while he agreed with some Obama policies including health care reform, he would be an independent voice looking out for Kentucky.

Asked about his campaign ads and reported comments depicting Paul as "crazy," Conway said: "I'm not saying Dr. Paul is crazy. I think some of his ideas are out of the mainstream and they're out of touch with the values of normal Kentuckians."

The debate moderated by "FOX News Sunday" anchor Chris Wallace included accusations by Paul that Conway flip-flopped on some issues, first backing and now questioning cap-and-trade energy legislation and the expiration of some Bush-era tax cuts.

Video: Obama: 'We cannot sit this out'
RELATED TOPICS

Conway denied changing positions but made clear that he now was firmly in the moderate camp on some hot-button issues, for example insisting that all the tax cuts should be extended.

Obama wants to extend the tax cuts for the 98 percent of the country earning up to $200,000 individually or $250,000 as families, while returning to higher tax rates of the 1990s for the 2 percent making more money.

Republicans, along with some Democrats -- including Conway -- say all the tax cuts should be extended as the economy slowly recovers from the recession.

Conway accused Paul of being out of touch with Kentuckians by advocating policies that he said were out of the 1930s. He repeatedly cited Paul's past suggestion of a $2,000 deductible for Medicare coverage and reducing the federal role in mine safety regulations as examples.

Polls show Conway may be starting to erode a big lead by Paul in the race to fill the seat held by retiring Republican Sen. Jim Bunning, a Hall of Fame baseball pitcher. The other senator-- Minority Leader Mitch McConnell -- holds the party's highest post in the chamber.

Paul, an eye surgeon, is the son of Rep. Ron Paul of Texas, who ran for the Republican nomination for president in 2008.