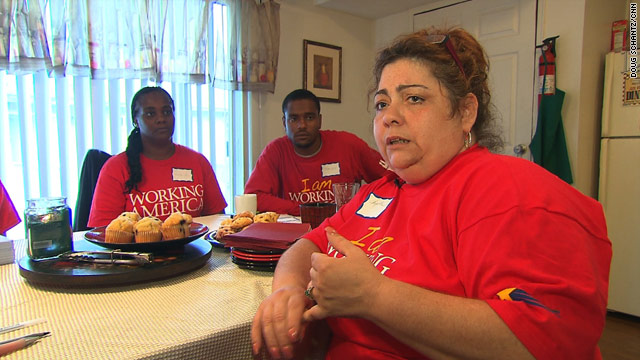 Angela Oravsky, right, is an unemployed mother who says she is going through savings to pay the rent.
STORY HIGHLIGHTS
RELATED TOPICS

Bensalem, Pennsylvania (CNN) -- It sounds like a political classified ad.

"Wanted: unemployed voters." That's the message from one of the nation's biggest labor unions, the AFL-CIO.

Between now and Election Day, the union's community outreach organization known as Working America will be recruiting jobless Americans for a new political movement.

The idea? To match the energy of the conservative Tea Party movement. The goal? To keep Democrats in power in Washington.

"We want to give people a choice," said Kim McMurry, a union organizer with Working America.

This week, McMurry met with a group of unemployed workers inside the home of Angela Oravsky, an unemployed mother who says she is burning through her daughter's college savings money just to pay the rent.

"I don't care if I have to scream from the rooftops, knock on doors. We have to come together as unemployed people," she said.

Another unemployed mother, Liz Lassiter, wiped away tears as she described how she had to live in her car during last year's brutal winter after losing her home.

The meeting was both cathartic and strategic.

Also on the agenda was a discussion on how to rally other jobless friends, relatives and neighbors to get behind Democratic candidates.

Union organizers with Working America said the gathering is one of countless meetings across the country over the next month.

Oravsky will speak at the One Nation rally Saturday on the National Mall in Washington. The event was organized by a coalition of unions and liberal-leaning groups to give voters an alternative to the conservative message offered at Tea Party rallies.

It's no accident that union organizers are trying to rally Democrats in Oravsky's hometown of Bensalem. She lives in a crucial swing congressional district, where incumbent Democratic Rep. Patrick Murphy is in danger of losing his seat.

Murphy won the seat in 2006 by beating Republican Rep. Mike Fitzpatrick. The two are now in a rematch that could affect the balance of power in the House of Representatives.

"If there are more people like me in Washington, we'll have a reasonable health care bill and lower taxes," Fitzpatrick said as he touted his plan to put Pennsylvanians back to work. "Lower taxes will permit the businessperson to create jobs," he added.

Murphy was not available for an interview.

Oravsky is out to prove that unemployed Americans are ready to roll up their sleeves, even if it's for a political cause.