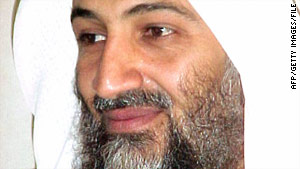 Osama bin Laden has been urging al Qaeda affiliates in Pakistan and beyond to be more militant, a U.S. official said.
STORY HIGHLIGHTS

Washington (CNN) -- While a videotape released Friday that is purported to be the voice of Osama bin Laden contains no call for terrorism, U.S. officials say that the al Qaeda leader has been urging affiliates to take action.

But one source cautioned against linking him to recent reports that he had ordered Mumbai-style attacks on Britain, France and Germany -- saying his name might have come up in connection with a different thread of intelligence.

The message posted on jihadist forums Friday urged Muslims to take on famine, flood relief, the effects of climate change and clean water. The video contained a still photograph of bin Laden and images of people in disaster zones receiving aid, along with the audio purported to be the al Qaeda leader. An actual video of bin Laden has not been seen in nearly a decade.

CNN could not verify the authenticity of the new message.

But a U.S. official said that bin Laden has been in communication with al Qaeda affiliates within Pakistan and beyond, encouraging them to take more militant actions. A second source from within the law enforcement community said the al Qaeda leader is believed to have recently expressed desire for some kind of attack to take place. But neither source said there is a specific time, target or mode of attack that is known by Western intelligence officials.

At the same time, the law enforcement source noted this is the first time bin Laden's name has come up in connection with a purported plot in quite a while and, if the intelligence is credible, it would appear to indicate he is "still in the game, for lack of a better term."

There are multiple plots at different stages of development, according to the U.S. official. While the possibility exists of attacks similar to those carried out in Mumbai, India -- where gunmen killed more than 160 people over three days in November 2008 -- it is not the only concern, the U.S. official said.

Intelligence officials believe the plotting is beyond aspirational but not to the level of something definitive.

"Don't think of this as one threat," the official said.