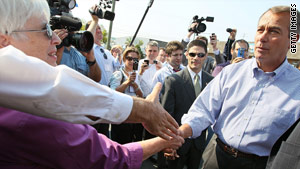 Republicans such as House Minority Leader John Boehner say the economy is too weak to raise taxes on anyone.

Washington (CNN) -- Democrats and Republicans both say they want Bush-era tax cuts extended this year for most, if not all Americans. Then why has it been so hard to make it happen?

The answer is election-year politics, with each party battling for any advantage in a climate of voter anger about politics-as-usual in Washington.

At issue is who will get credit for what is considered the most likely outcome -- the lower tax rates enacted in 2001 and 2003 getting extended permanently for Americans earning up to $250,000 per family or $200,000 as individuals.

Led by President Barack Obama, most Democrats favor that approach, which covers 98 percent of the taxpayers. They argue that including the wealthiest 2 percent of Americans would cost an additional $700 billion over 10 years that the nation cannot afford.

However, Republicans and some moderate Democrats argue the tax cuts should be extended to everyone to help continue the slow recovery from the economic recession. Otherwise, they say, the return of tax rates to higher levels of the 1990s would inhibit investment and growth.

Democrat leaders conceded last week that they lacked the votes to pass their proposal before upcoming congressional elections. They promised Sunday to bring the measure back up in Congress after the November 2 elections to force a vote before the tax cuts expire at the end of the year.

Video: Durbin: We don't have the votes
RELATED TOPICS

Sen. Dick Durbin of Illinois, the second-ranking Democrat in the chamber, told CNN's "State of the Union" that the December 31 deadline to act would bring Democratic unity on the issue.

"Some Democrats would say, well, perhaps we would do it a little bit differently," Durbin said of the call for extending the tax cuts across-the-board. "But if that position doesn't prevail, and I don't think it will, then the ultimate choice is going to be whether or not we have the $250,000 income threshold for these tax cuts. And I think at that time we'll have the support of all the Democrats as well as some Republicans."

On the same program, independent Sen. Joe Lieberman of Connecticut, who sits with the Democratic caucus, outlined a compromise in which the tax cuts would get extended permanently for those below the $250,000 threshold while also staying in place for wealthy Americans for "a year or two."

"I hope we can do that," said Lieberman, who currently sides with Republicans on the issue. "It's easy enough to say that people who make a lot of money don't deserve a tax cut now, but the truth is, if you have more money, you spend more money, you invest more money. That's what we need to happen now to grow jobs in our economy."

Senior White House adviser David Axelrod insisted to the ABC program "This Week" that the Obama plan would pass this year.

Republicans remained adamant that the economy was too weak to raise taxes on anyone.

"There should be no higher priority for the Congress in the United States today than making sure that no American sees a tax increase in January of 2011," Rep. Mike Pence, R-Indiana, told the NBC program "Meet the Press."

"What might happen down the road is not the subject today," McConnell told the ABC program "The question is, do we want to raise taxes in the middle of a very, very tough economy? All the Republicans think that's a bad idea, and a substantial number of the Democrats think the same thing."

Democratic leaders, however, say it is Republicans delaying the issue by "holding hostage" the tax cuts for families making up to $250,000 a year in their insistence on also including the wealthiest Americans.

"I believe, when these Republican members return to their districts, they're going to have to explain to their constituents why they're holding up tax cuts for" families earning up to $250,000 a year, Axelrod told the ABC program. "And I think it's an untenable position to say, 'We're going to allow your taxes to go up on January 1st unless the president agrees to give tax cuts to millionaires and billionaires.' "