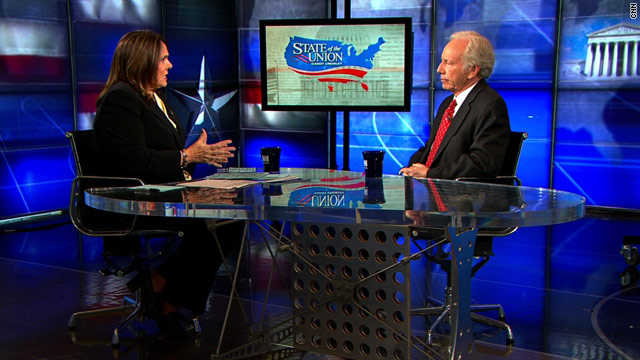 On the expiring Bush tax cuts:

"The Democrats have failed to lead on this. They're going to want to leave the House without dealing with it. That uncertainty itself is keeping capital on the sidelines and stopping jobs from being created in America." -- Republican Rep. Kevin McCarthy, "Fox News Sunday"

"There is no question that there should be no higher priority for the Congress of the United States today than making sure that no American sees a tax increase in January 2011, not one." -- Republican Rep. Mike Pence, NBC's "Meet the Press"

"So in a September session, it's hard to separate anything you do from politics. And the politics ultimately triumphed. We didn't get much of anything done. And that's why I think, ultimately, members of the Senate have decided the best thing to do is go home, particularly those who are running." -- Independent Sen. Joe Lieberman, CNN's "State of the Union"

"What it gets down to is we can count, and we know we don't have 60 votes for our tax position. We want to basically say after the election when we still face a deadline, by the end of the year we'll take up all these tax issues. That to me is the only realistic way to address it." --Senate Majority Whip Dick Durbin, "State of the Union"

"I want to be very clear as to what the stakes are here because what Republicans have said is that they are going to hold tax relief for 98 percent of the American people hostage until they can get permanent tax breaks for the top 2 percent." -- Democratic Rep. Chris Van Hollen, "Meet the Press"

Video: Durbin: We don't have the votes

On reducing the deficit:

"Let's not get to the potential solutions. Let's make sure Americans understand how big the problem is. Then we can begin to talk about possible solutions. And then work ourselves into those solutions that are doable." -- Boehner, "Fox News Sunday"

On criticism that he's too 'old school' to be speaker:

"Listen, I come from a family of 12. My dad owned a tavern. I've got two brothers that have been laid off in this recession and two brother-in-laws. I get it. I understand what's going on in America. And I believe that I have the support of my colleagues, current and future." -- Boehner, "Fox News Sunday"

Boehner: 'I believe have the support of my colleagues'

On the Tea Party:

"When the Tea Party becomes the gatekeeper of a Republican primary, we end up with contests we never dreamed of. Who would have guessed that today we would be taking an honest look at Alaska, Delaware and Kentucky, where we clearly have races where the Democrats can win. Or Florida, which is in turmoil because of the Tea Party. I think that shows the Tea Party position is too extreme for most voters. And I think we're going to do well in those states." -- Durbin, "State of the Union"

"The Tea Party movement, the grass-roots movement in Colorado, recognizes that Republicans are every bit as much to blame for where we are right now as Democrats, but we have to find some discipline from outside of Washington, D.C., and impose it on our Congress and executive branch." -- Tea Party-backed Senate candidate Ken Buck of Colorado, CBS's "Face the Nation"

"The Delaware primary was interesting -- a new candidate, fresh face. I think she has a good chance of winning." -- Senate Minority Leader Mitch McConnell, ABC's "This Week"

"I think his testimony was not appropriate. I think it was an embarrassment for Mr. Colbert more than the House." -- House Majority Leader Steny Hoyer, "Fox News Sunday"

"I think that he loves the city of Chicago. He's always believed that was the greatest job there is, and so I think he's drawn to it, but he still has family considerations to think about, and he's working those through." -- White House senior adviser David Axelrod, ABC's "This Week"

"There have got to be 10 or 20 viable names that are out there. And I have said publicly to Rahm Emanuel, if you want to run, you can't do it from the White House. You need do it from The Loop in Chicago." -- Durbin, "State of the Union"

Will Rahm run for the 'greatest job'?

On the education system:

"The status quo isn't working for children and it's not working for the country. What the president fundamentally gets is that we have to educate our way to a better economy." -- Secretary of Education Arne Duncan, "Meet the Press"

"We believe that the health care bill needs to be repealed and replaced with better reforms that will actually reduce costs and make sure that people have access." -- Republican Rep. Cathy McMorris Rodgers, "State of the Union"

"I've continued to say that the Arizona law should not be a model for the rest of the country. It should be a wake-up call to the federal government to once and for all take the issue of immigration seriously." -- Florida's GOP Senate candidate Marco Rubio, CBS's "Face the Nation"

"The parties are still working. They're still talking. Secretary Clinton and her team are working with them. We're very eager to keep these talks going. We think this is an unparalleled opportunity and a rare one and we have to seize the advantage of that, and we're going to urge and urge and push throughout this day to get some kind of resolution." -- Axelrod, "This Week"