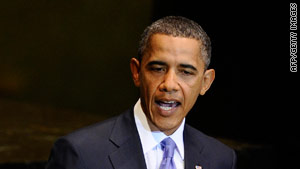 New York (CNN) -- President Barack Obama blasted his Iranian counterpart Friday for what he called offensive and hateful remarks about the September 11 attacks.

"Well, it was offensive. It was hateful," Obama said in part of an interview with BBC Persian released by the White House.

"And particularly for him to make the statement here in Manhattan, just a little north of ground zero, where families lost their loved ones -- people of all faiths, all ethnicities who see this as the seminal tragedy of this generation -- for him to make a statement like that was inexcusable," Obama said.

Obama said Ahmadinejad's comments stand in contrast to the sympathy expressed by the Iranian people in the aftermath of the attacks.

"And it just shows once again sort of the difference between how the Iranian leadership and this regime operates and how I think the vast majority of the Iranian people, who are respectful and thoughtful, think about these issues," Obama said.

Ahmadinejad delivered a fiery speech before the U.N. General Assembly on Thursday, criticizing Washington, capitalism and the world body itself.

Though incendiary statements from Ahmadinejad are nothing new, tension in the hall grew as the Iranian leader recounted various conspiracy theories about the September 11 attacks.

"Some segments within the U.S. government orchestrated the attack," Ahmadinejad told the General Assembly.

He followed with the claim that the attacks were aimed at reversing "the declining American economy and its scripts on the Middle East in order to save the Zionist regime. The majority of the American people, as well as most nations and politicians around the world, agree with this view."

That appeared to be the last straw for many of the diplomats. Representatives from the United States, Britain, Sweden, Australia, Belgium, Uruguay and Spain walked out while Ahmadinejad asserted that the U.S. government was involved in the attacks or allowed them to happen as an excuse to go to war in Afghanistan and Iraq.

Obama, who had delivered his address to the General Assembly earlier, had already left the grounds before Ahmadinejad spoke.

Mark Kornblau, a spokesman for the U.S. mission to the United Nations, issued a statement saying, "Rather than representing the aspirations and goodwill of the Iranian people, Mr. Ahmadinejad has yet again chosen to spout vile conspiracy theories and anti-Semitic slurs that are as abhorrent and delusional as they are predictable."

The head of the National September 11 Memorial said his organization's work is made even more important by Ahmadinejad's statements.

"While the impulse may be to ignore the rant of an individual who has consistently demonstrated a refusal to accept basic historic facts, including the murder of millions during the Holocaust, we cannot," said Joe Daniels.

"Because someone like Ahmadinejad espouses and expresses such lies publicly, we at the National September 11 Memorial and Museum must lead the preservation and presentation of the authentic history of what occurred on 9/11," he said. "This history not only includes the worst of humanity in the execution of the heinous terrorist attacks, but also the best of who we can be through how this country and much of the world came together to support those in need."

Ahmadinejad went on to compare the death toll in the September 11 attacks to the casualty count in the wars in Afghanistan in Iraq.

"We do not consider the remarks as those only belonging to the president himself, rather as a divine gift to the [Iranian] nation," said Hojjatoleslam Kazzem Sediqi, who led the prayer session Friday.