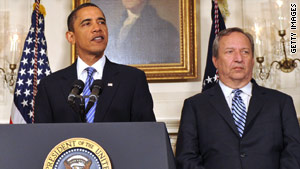 (CNN) -- President Barack Obama's top economic adviser is going back to Harvard University at year's end, the White House announced Tuesday after hints of a shakeup of the administration's team.

Larry Summers, the former Treasury secretary who led Obama's National Economic Council, will return to academia at the end of 2010, the White House announced. In a written statement on the move, Obama praised Summers for his "brilliance, experience and judgment."

"Over the past two years, he has helped guide us from the depths of the worst recession since the 1930s to renewed growth," Obama said. "And while we have much work ahead to repair the damage done by the recession, we are on a better path thanks in no small measure to Larry's wise counsel."

Summers, who was Harvard's president from 2001 to 2006, said he will miss the White House and the "daily challenges of economic policymaking," but was looking forward to teaching again. His departure is the third high-profile exit from the president's economic team since the beginning of summer, and it comes as the administration grapples with poor reviews of its policies after a deep recession that has unemployment at nearly 10 percent.

Congressional elections are six weeks away, and a CNN-Opinion Research Corp. poll conducted in early September found nearly 60 percent of Americans disapproved of the administration's handling of the economy. Fewer than 20 percent had a positive view of conditions, the survey found.

The National Bureau of Economic Research reported Monday that the recession that began in December 2007 officially ended in June 2009. But growth has been sluggish, unemployment currently stands at 9.6 percent and economists are debating whether the U.S. economy is headed for another downturn.

A White House official, speaking on condition of anonymity, said Summers had committed to serving only one year. Obama asked him to stay on for a second in late 2009. But Harvard has a "strict" two-year leave policy for professors, so Summers agreed "with the understanding that he would return in time for the spring semester of 2011," the official said.

Summers served as Treasury secretary at the end of the Clinton administration and was the department's No. 2 official in the mid-1990s. He was criticized by conservatives for his role in the Obama administration's economic stimulus package and its bailout of automakers General Motors and Chrysler, while some of the administration's liberal supporters accused him of watering down needed reforms in the wake of the financial crisis that erupted in 2008.

He was rarely seen among the cadre of White House and Treasury staffers who helped lobby for the recent overhaul of financial regulations, although he was involved behind the scenes, said lobbyists and congressional aides. When he did address the issue publicly, it was often in response to criticism of his role in the Clinton administration.

Summers ran Treasury during the repeal of the Glass-Steagall Act that allowed commercial banks to get involved in investment banking, which some say contributed to the financial crisis. And he is also accused by some critics of ignoring a push for tougher regulation of derivatives by Brooksley Born, who had been the former head of the Commodity Futures Trading Commission.

In a forum on the business news channel CNBC on Monday, Obama said Summers and Treasury Secretary Timothy Geithner "have done an outstanding job, as have my whole economic team." But he added, "They've been at it for two years, and they're going to have a whole range of decisions about family that will factor into this, as well."

Asked Tuesday whether the answer signaled a shakeup of the administration's economic team, Obama spokesman Robert Gibbs told reporters, "It's not for me to comment on or to make decisions for individuals that decide again they're going to go back to doing what they were doing before."

Romer, a leading supporter of health care reform and the president's stimulus plan, was replaced by Austan Goolsbee, a trusted voice for Obama since the 2008 presidential campaign. Senior administration officials noted at the time that the never-shy Goolsbee has previously clashed with Summers in private over policy, but the officials said that those discussions were spirited but also professional.

CNN's Suzanne Malveaux and Jennifer Liberto contributed to this report.