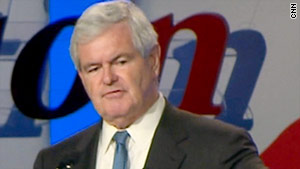 Newt Gingrich has repeatedly acknowledged he is testing the waters in advance of a potential bid for president.
STORY HIGHLIGHTS

Washington (CNN) -- Former House Speaker Newt Gingrich repeatedly brought social conservatives to their feet Saturday with an impassioned address in which he warned that America faces a dual threat from the Democratic establishment on the one hand and Islamic terrorists on the other.

"We are at a point where our establishment is sliding into policies of such disastrous impact that they will in fact fundamentally challenge the survival of America as we know it," Gingrich said during his speech to the fifth annual Values Voter Summit in Washington.

"On the one front we have a secular socialist machine led by (President) Obama, (House Speaker Nancy) Pelosi, and (Senate Majority Leader Harry) Reid, and on the other front we have radical Islamists who would fundamentally change this country into a system none of us in this room would recognize," he continued to thunderous applause.

Gingrich, who has repeatedly acknowledged he is testing the waters in advance of a potential bid for president, largely stuck to red meat issues during his 30-minute speech before a gathering of activists who could play a crucial role in selecting the next Republican presidential candidate.

"If she's going to represent left-wing thought police about Obamacare, she should be forced to resign by the new Congress," he said.

Perhaps the former House Speaker's loudest applause came when he weighed in on the controversial Islamic center and mosque proposed to be built near ground zero, declaring, "We as Americans don't have to tolerate people who are supportive of violence against us, building something at the sight of the violence."

"This is not about religious liberty, they want to build that mosque in the South Bronx, frankly they need the jobs," he said. "But I am totally opposed to any effort to impose Sharia on the United States, and we should have a federal law that says under no circumstance, in any jurisdiction in the United States, will Sharia be used in any court to apply to any judgment made about American law."

Sharia is considered the sacred law of Islam as set forth by the Quran and the Islamic Prophet Muhammad.

Gingrich also laid heavy praise on the "energy" of the Tea Party movement and its newest victor, Republican Senate candidate Christine O'Donnell in Delaware, who defeated longtime Congressman Mike Castle, considered a shoo-in before the election.

And he sharply derided Republican Lisa Murkowsi, the Alaska senator who announced Friday that she would mount an independent bid after losing to a Tea Party-backed candidate last month.

"Senator Murkowsi is fundamentally cheating," he said. "If she wanted to run as an independent she should have."

Gingrich's speech comes on the second and final day of the gathering and hours before attendees will vote in a 2012 presidential straw poll -- the results of which will be one indication of which potential White House hopeful can count on support from the social conservative faction of the party that is so vital in the primary process.