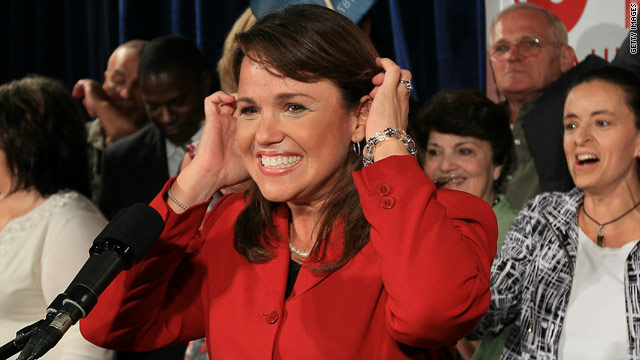 Among other things, the cash-strapped O'Donnell couldn't compete with the deep pockets of the 36-year-Senate veteran -- part of a recurring theme of financial hardship woven throughout both her political and personal life.

O'Donnell still has debts from her 2008 campaign, according to the Federal Election Commission. It took her 12 years to pay off college debt from Fairleigh Dickinson University, a recent Politico report noted.

She finally received a bachelor of arts degree in August, Politico reported.

O'Donnell, who has worked as a media consultant, also repeatedly has been forced to deal with the Internal Revenue Service on issues relating to unpaid income taxes.

"I think the fact that I have struggled financially is what makes me so sympathetic" to many people, she said.

On Sunday, John McCormack, a writer for The Weekly Standard, reported that in 2005 O'Donnell filed a lawsuit asking for $6.9 million in damages for alleged gender discrimination and wrongful termination by a conservative nonprofit organization called the Intercollegiate Studies Institute.

She dropped the lawsuit in 2008, saying she could no longer afford an attorney.

In addition to raising questions about the alleged harassment, the article questioned her honesty in part by highlighting a claim in the lawsuit that O'Donnell once tried to take graduate-level classes at Princeton University.

According to The Weekly Standard, the lawsuit alleged O'Donnell "lost the increased earning power that a master's degree from Princeton would have created. In the future with proper finances, Miss O'Donnell should probably be able to return and complete that program."

The problem was that O'Donnell never took any graduate courses at Princeton, something she acknowledged to CNN.

She was merely auditing an undergraduate course, said her campaign manager, Matt Moran. Moran called The Weekly Standard report part of a smear campaign being conducted by O'Donnell's opponents.

Politically, O'Donnell is firmly aligned with Tea Party movement, which funneled more than $150,000 to her campaign shortly before Tuesday's primary. Largely opposed to abortion rights and gun control, she has been endorsed by two conservative populists -- former Alaska Gov. Sarah Palin and Sen. Jim DeMint of South Carolina .

Among other things, O'Donnell, a Catholic, once headed a pro-abstinence group called Saviors Alliance for Lifting the Truth.

O'Donnell, who is struggling to gain the support of GOP leaders, insists she will win the general election with or without the backing of the Republican establishment.

"We will get the support that we need," she predicted Tuesday night.

O'Donnell will face off in November against Democrat Chris Coons, executive of New Castle County.

CNN's Alan Silverleib and Dana Bash contributed to this report.