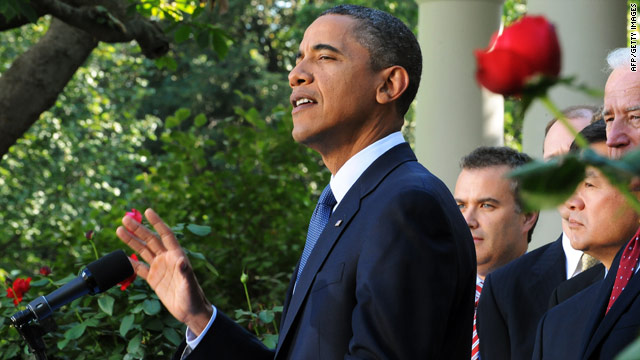 Washington (CNN) -- President Barack Obama tore into GOP congressional leaders again Wednesday for trying to block his small business aid bill and opposing his plan to extend the Bush tax cuts only to those making under $250,000.

Flanked by his economic team at the White House, the president specifically thanked GOP Sens. George Voinovich of Ohio and George LeMieux of Florida for breaking with the Republican leadership on the small business bill.

The two senators helped the $42 billion measure clear a key procedural hurdle on Tuesday, setting it up for final passage.

They understand "we don't have time to play games" anymore, Obama said. Small business owners have been "waiting for help" and "putting off plans to hire more workers."

The Senate is scheduled to vote on ending debate on the measure Thursday, followed by the vote on its final approval, according to Senate Majority Leader Harry Reid, D-Nevada.

The measure is expected to create 500,000 jobs, according to a summary of the bill from the Senate.

Video: Boehner calls for up or down vote

Among other things, it would authorize the creation of a $30 billion fund run by the Treasury Department that would deliver ultra-cheap capital to banks with less than $10 billion in assets.

The idea is that community banks do the lion's share of lending to small businesses, and pumping capital into them will get money in the hands of Main Street businesses.

Obama said he is "grateful" that Congress is now on the verge of passing the bill -- which had been stalled until the two senators broke from GOP leaders -- but he added that it "should not have taken this long."

The president also said Republican leaders are holding "middle class tax cuts hostage" by refusing to sign on to his plan to allow the Bush tax cuts for wealthier Americans to expire.

"I understand there's an election coming up, but the American people didn't send us here to just think about our jobs. They sent us here to think about theirs," he said.

Republicans have repeatedly expressed their opposition to any tax hikes in light of the weak economic recovery. They've asserted that allowing taxes to rise on those making over $250,000 would result in a hit on small businesses.

"Tax hikes aren't going to grow the economy, just as no amount of spin can change the fact that the Washington spending spree hasn't led to a hiring spree -- despite the promises of Democrats in Washington," said Senate Minority Leader Mitch McConnell, R-Kentucky.

All of the Bush tax cuts are currently set to expire at the end of this year.

Also Wednesday, 31 House Democrats sent a letter they signed to House Speaker Nancy Pelosi and House Majority Leader Steny Hoyer urging them to extend the expiring tax breaks for all income levels, including the wealthy.

Pelosi and other House Democratic leaders have made it clear they support Obama's proposal to limit the extended tax breaks to the $250,000-or-below threshold. But with the midterm elections less than two months away, leaders have not yet decided whether they will schedule a vote on the legislation before voters go to the polls.

"We believe in times of economic recovery it makes good sense to maintain things as they are in the short term, to provide families and businesses the certainty required to plan and make sound budget decisions. Providing this certainty will give small businesses, the backbone of our economic recovery, confidence and stability," the lawmakers wrote.

CNN's Alan Silverleib and Catherine Clifford contributed to this report