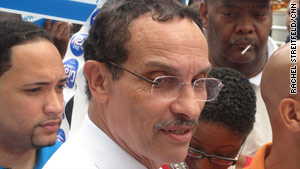 Fenty swept into office in 2006 promising to fix the district's struggling schools, but he may have lost his bid for another term, in part, because of how he tried to reform them.

While it was a local election, the race attracted national attention, because its outcome could carry significant implications for the national debate over education reform.

Early in his term, Fenty brought in Michelle Rhee as chancellor of D.C. Public Schools. Rhee has since become well known for her reform efforts, ushering in a wave of controversial changes that has become a model of education reform advocated by the Obama administration.

She shut down two dozen schools, fired hundred of educators including more than 100 teachers this summer for poor performance and overhauled the teacher evaluation system to include, for the first time, student performance as a measure of success. Rhee has also pushed for teacher merit-based pay.

Local and national teachers unions fought her along the way.

What will happen with the district's schools now that Gray is the projected winner is not entirely clear. Gray told CNN he also is committed to aggressive education reform and for having a strong chancellor.

Gray avoided answering the question of whether he would keep Rhee on to run the district's school system if he won.