Delaware not the only Tea Party vs. GOP battle Tuesday 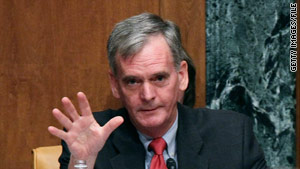 Kelly Ayotte, the state's former attorney general, stepped down to run for the Senate nomination after being encouraged to run for the open seat by national Republicans. For months, polls suggested that Ayotte was the frontrunner in the seven-candidate contest, which also includes businessmen Bill Binnie and Jim Bender. But recent surveys in the Granite State indicate that Ovide Lamontagne, a Manchester attorney and the 1996 Republican nominee for governor, has narrowed the gap with Ayotte.

But the biggest difference with the Delaware race is that Sarah Palin is endorsing the more conservative Christine O'Donnell there. In New Hampshire, the former Alaska governor is backing Ayotte.

Video: Who is funding the Tea Parties?

Video: What to watch for Tuesday
RELATED TOPICS

In a robo-call, Palin calls Ayotte a "Granite Grizzly," and adds that "she's the true conservative running for the U.S. Senate in New Hampshire."

Palin's endorsement earlier this summer and Ayotte's support by many national Republicans may have backfired in fiercely independent New Hampshire. The moves have drawn repeated criticism by the Union Leader.

Binnie, who's spent millions of his own money in the race, is touting himself as the conservative in the contest, and appears to be aiming toward independent voters who are allowed to vote in either of Tuesday's Republican or Democratic primaries.

An avalanche of recent attack ads by Binnie, Ayotte and two-term Rep. Paul Hodes, the Democratic nominee, have flooded New Hampshire airwaves, but Lamontagne appears to have remained above the fray.

Just as a victory by O'Donnell in Delaware will be seen as a major victory for the Tea Party movement and a defeat for the national party, so will a win by Lamontagne.