Obama in 'wrestling match' with GOP over taxes 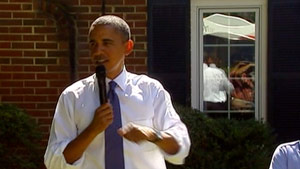 President Obama talks to a small group Monday outside the home of a family in Fairfax, Virginia.
STORY HIGHLIGHTS
RELATED TOPICS

Fairfax, Virginia (CNN) -- President Barack Obama lashed out at congressional Republicans again on Monday, telling a group of northern Virginia residents that a GOP push to extend the Bush-era tax cuts for voters making over $250,000 is unaffordable.

His administration is "in this wrestling match" with the GOP leadership over whether to extend the 2001 and 2003 tax cutes for the richest Americans, Obama said. Doing so would cost another $700 billion, "and we just can't afford it," he declared -- a slap at Republican cries for fiscal responsibility.

The president made his remarks during an appearance at a private home in the Washington suburbs of Fairfax County.

He appeared with, among others, Virginia Rep. Gerry Connolly, a first-term Democrat in the midst of a tough re-election fight.

Democratic congressional leaders agree with Obama that tax relief should be extended only to those making $250,000 or less, but Republicans have argued that taxes shouldn't be raised on anyone -- including the wealthy -- while the economy is weak.

House Minority Leader John Boehner, R-Ohio, said Sunday on CBS's "Face the Nation" that he would vote for extending the tax cuts only for the middle class if that was the only option he had but that he would do everything he could to extend them for everyone.

However, a growing number of congressional Democrats have said they agree with GOP leaders that Congress should, at a minimum, pass a temporary extension of the tax cuts for wealthier Americans until the economy improves.

Connolly said Monday he would join other House Democrats in asking the leadership to temporarily extend the tax cuts to everyone because of the recovering economy.

"We think there should be a temporary extension of tax cuts for everyone," Connolly said.

Connecticut Sen. Joe Lieberman, an independent who caucuses with Democrats, said before Obama's appearance Monday that he doesn't "think it makes any sense to raise any federal taxes at the moment," and will push for a one-year extension of the all of the Bush tax cuts.

Americans "have had it," asserted Senate Minority Leader Mitch McConnell, R-Kentucky. "They are tired of Democratic leaders in Washington pursuing the same government driven programs that have done nothing but add to the debt and the burden of government."

Republicans have been hammering Democrats in recent weeks over the country's near double-digit unemployment rate and growing public angst over the strength of the economic recovery.

The small-business legislation would authorize the creation of a $30 billion lending fund to help provide cheap capital to community banks. It also provides $12 billion in tax relief to small businesses between 2010 and 2020, and $1.5 billion in grants to state lending programs.

Most Republicans claim that the bill doesn't go far enough to help small businesses, though one key GOP senator -- Ohio's George Voinovich -- recently announced that he would no longer back Republican efforts to obstruct the plan.

Asked by one Virginia resident whether he could find any common ground with what appears likely to be a more conservative, Republican Congress starting next January, Obama cited the issues of energy, immigration and long-term debt control.

"We do have a very real problem with debt and deficits," the president said. There are "legitimate fears" about whether "we're hocking our future."

In a blow to his labor base, Obama told one Fairfax resident that although he supports the Employee Free Choice Act -- a bill designed to make it easier to unionize -- any chance to get the measure passed right now "is not real high."

CNN's Alan Silverleib and Xuan Thai contributed to this report.