Impeachment trial of federal judge gets under way in U.S. Senate 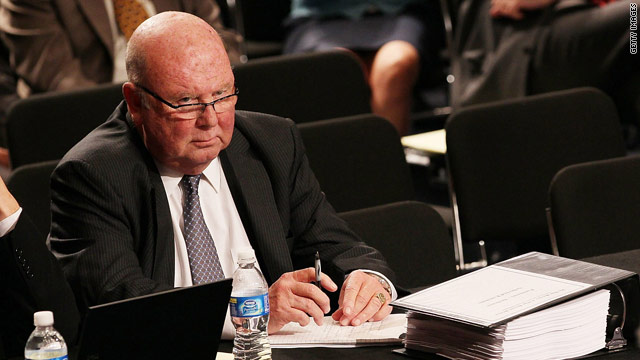 Washington (CNN) -- The U.S. Senate on Monday started the impeachment trial of federal judge G. Thomas Porteous Jr. -- the first such trial since the impeachment of former President Bill Clinton in 1999.

The Senate Impeachment Trial Committee will submit its summary to the full Senate, which is expected to vote later this year. The judge is accused of corruption and accepting kickbacks, as well as lying about his past to the Senate and FBI regarding his nomination to the federal bench.

In March, the House of Representatives voted unanimously to impeach Porteous, making him the nation's 15th federal judge ever impeached.

Porteous is from the U.S. District Court for the Eastern District of Louisiana.

Last year, the House Judiciary Committee Task Force on Judicial Impeachment held evidentiary hearings that led to unanimous approval of the four articles of impeachment, citing evidence that Porteous "intentionally made material false statements and representations under penalty of perjury, engaged in a corrupt kickback scheme, solicited and accepted unlawful gifts, and intentionally misled the Senate during his confirmation proceedings," a House release said.

"Litigants have the right to expect a judge hearing their case will be fair and impartial, and avoid even the appearance of impropriety. Regrettably, no one can have that expectation in Judge Porteous' courtroom."

Porteous was appointed to the federal bench in 1994.

In 2007, after an FBI and federal grand jury investigation, the Justice Department alleged "pervasive misconduct" by Porteous and mentioned evidence "that Judge Porteous may have violated federal and state criminal laws, controlling canons of judicial conduct, [and] rules of professional responsibility, and conducted himself in a manner antithetical to the constitutional standard of good behavior required of all federal judges."

The complaint said the department had opted not to seek criminal charges for reasons including statute-of-limitations issues.

But Westling said the statute of limitations was not applicable.

The impeachment task force held hearings late last year that focused on allegations of misconduct by Porteous, including:

-- Involvement in a corrupt kickback scheme;

-- Failure to recuse himself from a case he was involved in;

-- Allegations that Porteous made false and misleading statements, including concealing debts and gambling losses;

-- Allegations that Porteous asked for and accepted "numerous things of value, including meals, trips, home and car repairs, for his personal use and benefit" while taking official actions on behalf of his benefactors; and

-- Allegations that Porteous lied about his past to the Senate and to the FBI about his nomination to the federal bench "in order to conceal corrupt relationships," Schiff said in a prepared statement.

Porteous was invited to testify, but he declined to do so, Schiff said.

"His long-standing pattern of corrupt activity, so utterly lacking in honesty and integrity, demonstrates his unfitness to serve as a United States District Court judge," he said.

Porteous, 63, has not worked as a judge since he was suspended with pay in the fall of 2008, Westling said.

The last impeachment of a federal judge occurred last year, when Judge Samuel B. Kent of the U.S. District Court for the Southern District of Texas resigned after being impeached on charges of sexual assault, obstructing and impeding an official proceeding and making false and misleading statements, according to the website of the Federal Judicial Center.

The Senate, sitting as a court of impeachment, dismissed the articles.