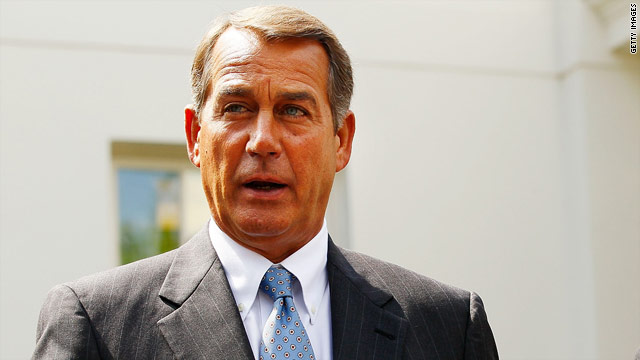 John Boehner said he would consider supporting President Obama's tax-cut extension plan if no other option were available.
STORY HIGHLIGHTS

Washington (CNN) -- GOP colleagues of House Minority Leader John Boehner are distancing themselves from the Ohio Republican's recent remarks that he would support President Barack Obama's proposal to renew the expiring Bush tax cuts only for those making less than $250,000 if it were his only option.

Senate Republican Leader Mitch McConnell, R-Kentucky, announced Monday he will introduce legislation that would ensure that no one pays higher income taxes next year.

"We can't let the people who've been hit hardest by this recession and who we need to create the jobs that will get us out of it foot the bill for the Democrats' two-year adventure in expanded government," McConnell said on the Senate floor.

"I will do everything in my power to stop President Obama and Speaker Pelosi from raising taxes on working families, small business people, and investors," Cantor said.

A spokeswoman for House GOP Conference Chairman Mike Pence, R-Indiana, told CNN Monday that Pence "believes that there should be no tax increase on any job creator next year."

Obama, meanwhile, said the GOP push to extend the Bush-era tax cuts for voters making over $250,000 is unaffordable.

His administration is "in this wrestling match" with the GOP leadership over whether to extend the 2001 and 2003 tax cuts for the richest Americans, Obama told residents of northern Virginia. Doing so would cost another $700 billion, "and we just can't afford it," he declared in a slap at Republican cries for fiscal responsibility.

The issue is likely to be the most contentious faced by Congress in the final weeks before the November congressional election, and Boehner's signaling of possible support for Obama's plan unsettled many Republicans.

As soon as Boehner made his comments on CBS' "Face the Nation" on Sunday morning, there was a flurry of calls among GOP House members, according to several Republican sources.

One GOP aide characterized the reaction from members as "very frustrated and surprised." Republicans have been consistently hammering the theme that anything less than an extension of all the Bush tax cuts would be a massive tax increase on small businesses that are critical to the economic recovery.

"The problem is, it's like playing a game of poker. You don't show the other team your hand," one of the GOP aides told CNN.

"Republican members are put in the awkward box, which is essentially being for a tax increase for small businesses, which we have fought against for the entire year," this aide added.

Boehner's office argues that the GOP leader has not shifted his position, and continues to push for all current tax rates to be held at the same levels. A senior Boehner aide noted that his comments over the weekend were an intentional move to undercut the White House and congressional Democrats' argument that Republicans are holding middle class tax breaks hostage.

In a sign that House Republicans realize that Boehner's comments stepped on the party's tax message, the House Republican Conference circulated talking points on Monday for members to use if they are asked if they agree with the Republican leader's position.

The document suggests that instead of talking about how they would vote on just the extension of middle class tax breaks, members should stress the proposal that Boehner unveiled last week -- to freeze all current tax rates for two years and cut spending back to 2008 levels.

Several GOP sources acknowledged that Boehner's position is ultimately where the debate on Capitol Hill will likely end up -- with a House vote just to extend the tax cuts to those making up to $250,000. The aides also said GOP representatives would end up voting for that proposal -- just as Boehner said he would.

"The phony suspense about the end result has been eliminated," one aide said.

House Democratic leaders are still discussing the strategy for dealing with the expiring tax cuts, but one senior Democratic leadership source said a vote on a bill just aimed at middle class tax breaks is more likely now that the top House Republican has publicly said he'd support it.

With Congress about to come back into town this week, Republicans do not want to concede the fight on the tax issue, which they believe hurts many Democrats facing tough re-election races in conservative-leaning districts.

"While we want to fight for the middle class, small businesses are the job creators. Both are equally important," an aide to one senior House Republican said.

Regardless of Boehner's signal that he's willing to negotiate, GOP aides said publicly that all leaders will continue to press for the full extension. Republicans will also point to statements from a number of House Democrats who want a temporary extension of all tax rates.

A small group of moderate and conservative Democrats is circulating a letter to Pelosi urging her to have a vote on a proposal similar to Boehner's.

One aide to a leading conservative House Republican downplayed any talk of GOP division, saying the public already believes Republicans are the party fighting to keep tax rates down.

"Nobody out in real America believes for one minute that Democrats favor lower taxes and Republicans don't," the aide asserted.

Nevertheless, the divide over the tax message makes for a potentially awkward return to Washington for House GOP leaders this week.

Up until now, elected leaders have managed to stay on the same page. On Tuesday, however, three conservative House Republicans dubbed "the Young Guns" -- Cantor, Deputy Whip Kevin McCarthy of California, and Paul Ryan of Wisconsin -- will launch a book tour to promote a policy blueprint that is likely to create new questions about a possible split with Boehner on the tax issue.