Tea Party activists gather in Washington ahead of midterm elections 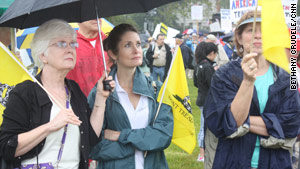 The collection of disparate groups and individuals, all supportive of the Tea Party movement, came together to protest what they consider to be out-of-control spending, excessive taxes and a government run amok.

Under the theme of "Remember in November" -- a reference to the upcoming mid-term congressional elections -- they warned both Democrats and Republicans that it was time for the American people to take back Congress.

"There's only one power on Earth that is big enough to wreck this country, and that's big government," said former House leader Dick Armey, chairman of the FreedomWorks group that organized the rally.

Quoting the film character Dirty Harry Callahan, Armey said "a man's got to know his limitations," and added that it was time for the government to know its limitations.

Video: Who is funding the Tea Parties?

Before Sunday's rally, activists marched along Pennsylvania Avenue from the Washington Monument to the steps of the capitol building despite gray skies and persistent rain. Signs reflected their socially conservative views, with some marchers carrying the Revolutionary War-era banner of a coiled snake and the slogan "Don't Tread on Me," while other placards read "Less Marx, More Jefferson" and "Big Government is Organized Crime."

"Here we are in a battle for our lives and a battle for the future of this republic," FreedomWorks Director of State and Federal Campaigns Brendan Steinhauser told the crowd assembled before the march.

"Only a few weeks before this important November election, send one more final message to the folks down the street in that dome behind us," Steinhauser encouraged the marchers. "...We're tired of the way they've been acting in Congress. We're tired what the president has been doing and we've been telling them this for over two years."

As the march proceeded, a few hecklers along Pennsylvania Avenue taunted activists, yelling that they were missing in action when the Bush administration added to the nation's debt. Other hecklers urged Tea Party activists to go home.

At the rally, the mention of top Democrats including President Barack Obama and House Speaker Nancy Pelosi prompted loud booing from the mostly white, middle-aged crowd.