Sounds of Sunday: Most intriguing quotes 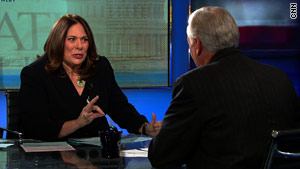 On the midterm elections:

"We are going to hold the House. ... I have been with 20 candidates, 11 states over the last two and half weeks. Our candidates are feeling good." -- House Majority Leader Steny Hoyer, CNN's "State of the Union."

State of the Union: Candy Crowley's Crib Sheet for September 12

"This president set an all-time record for the number of Americans on food stamps. That's not where you want to go, you want to go to a paycheck not a food stamp." -- Former House Speaker Newt Gingrich, "Fox News Sunday"

"I think it's fair to say that this recession that began in 2007 put us very deep in the hole. It's going to be a long battle to get out of that deep of a recession. So we've had positive private sector job growth for eight months, but I don't think the unemployment rate will be coming down significantly anytime in the near future." -- Chair of the Council of Economic Advisers Austan Goolsbee, "Fox News Sunday"

Video: Which terrorist do we need to find?

"If the only option I have is to vote for those at 250 [thousand dollars] and below, of course I'm going to do that. But I'm going to do everything I can to fight to make sure we extend the current tax rate for all Americans." -- House Minority Leader John Boehner, CBS' "Face the Nation"

"He's looking at it. He loves the city of Chicago, no doubt about it. He's got a difficult decision to make." -- Axelrod, NBC's "Meet the Press"

On the role of Tea Party candidates inside the Republican Party:

"These are independent-minded people. They really have no particular appreciation for the performance of either party in the past several years. They've -- they want to run for office in order to change that. For the most part, they've understood that our path to a position in Washington is through the Republican Party giving our small-government values, but we're here to reform and restore that party to dedicate a service to that proposition." -- Former House Majority Leader Dick Armey, R-Texas, "State of the Union"

On plans for an Islamic center near ground zero in New York:

"The imam has a right to put the mosque there. Freedom of religion gives him that right. The minister has the right to burn the Quran. The same amendment of the Constitution gives him that right, the First Amendment. In either case, common sense and a real dedication to healing that these men of God would theoretically have would tell you not to do it because you're hurting too many people." -- Former New York Mayor Rudy Giuliani, "Meet the Press"

On sensitivities around the Islamic center

"The people [Imam Feisal Abdul Rauf are] hurting here most are the families that have lost loved ones down there. They don't all feel that way, but 80 or 90 percent feel extremely hurt by this. It's making them relive the pain. They should be the ones to get the most consideration. Not the imam, not me, not the president, not the mayor. They are the ones that are the most affected by this." -- Giuliani, "Meet the Press"

"Look, we are always dealing with ever-evolving types of threats. And some of them are international in derivation; some of them result from U.S. persons. It is a very dynamic threat environment. One of the things we have been focused on is really getting preparation for and the ability to respond to threats of any kind outside of Washington, D.C., spread across the homeland, into state and local hands, empowering them; more information-sharing, more resources to them. Because we are never going to be totally immune from threats." -- Homeland Security Secretary Janet Napolitano, "State of the Union"

"The enemy adapts as we adapt, and that's an ongoing process. So what people are seeing now is it's no longer just South Asia, where we were focused on over the last several years. It's Yemen. It's Somalia. It's now North Africa. And that's alarming to people, because what they see is it's becoming more diffuse. And that's, I think, an issue we are going to have to deal with over the next few years." -- Michael Chertoff, former homeland security secretary, "State of the Union"

"There is no question over the last nine years the American government has made the American people safer, and we have not been attacked, the answer is I've also seen in the last year, the Christmas Day attempt, the Times Square attempt, Zazi Najibullah in New York on the subways. And so I think people have a sense this may actually happen, despite all of the efforts and all of the money we've spent, this is a very determined enemy." -- Frances Fragos Townsend, former homeland security adviser to President George W. Bush, "State of the Union"