What's weighing on Obama as he makes economic pitch 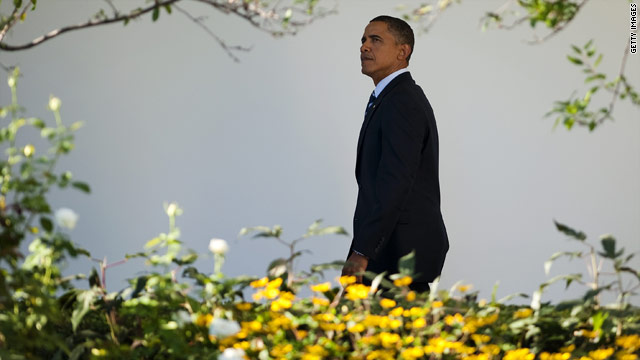 President Obama heads to the Oval Office this week. The president on Friday is holding his eighth news conference.
STORY HIGHLIGHTS

Washington (CNN) -- President Obama, looking to assure the country that he's the man with an economic plan, is taking his message to the media, and ultimately, the American public.

His Friday press conference at the White House undoubtedly will focus on the economy, but other controversial topics more than likely will come up: from the Florida pastor who had threatened to burn Qurans on September 11 to the building of an Islamic center near ground zero to the possibility that chief of staff Rahm Emanuel will leave his post to run for mayor of Chicago, Illinois.

CNN takes a look at the top issues Obama is facing on the economic front before the critical midterm elections in November.

His last news conference there was on May 27 in the East Room, and was devoted in large part to the oil disaster in the Gulf of Mexico. It will be Obama's eighth news conference since taking office.

Video: Gibbs: 'We can't afford it'

The president has pushed for a new $350 billion plan to lift the sagging economy, including $200 billion in tax cuts for businesses to purchase new equipment and write off 100 percent of new investments through the end of 2011. Democrats argue that helping small businesses will create more jobs.

It comes at a time when Americans are deeply concerned over the high unemployment rate -- now at 9.6 percent -- and what they see as the lack of hiring.

Obama also has touted a $50 billion proposal for infrastructure investment as well as $100 billion to extend tax credits to businesses permanently for research and development.

Another option on the table, though controversial, is a second stimuluslike package. If Congress were to pass new economic recovery measures, it could pay for them by raising some $300 billion in new revenue by closing "tax loopholes," according to White House economist Jason Furman.

Republicans continue to hammer Obama and Democrats on what they call a nonexistent plan for dealing with the troubled economy.

House Minority Leader John Boehner, R-Ohio, released a two-part plan Wednesday to fix the economy. It calls for Congress to freeze most government spending for next year at 2008 levels before the nearly $800 billion stimulus bill was passed. In addition, the plan would enact a two-year freeze on all current tax rates.

Putting a face on the opposition

With the election just weeks away and polls suggesting a possible Republican takeover of the House of Representatives, the White House and top Democrats are looking to stem the tide with good, old-fashioned politicking.

During a speech on the economy Wednesday in Ohio, Obama lashed out at his GOP opponents, including Boehner, who could become House speaker if Republicans stage a takeover come November.

The election is about "fear versus hope [and] the past versus the future. It's still a choice between sliding backward and moving forward. That's what this election is about. That's the choice you'll face in November."

Boehner immediately lashed back at Obama, declaring in a statement that if the president "is serious about finally focusing on jobs, a good start would be taking the advice of his recently departed budget director [Peter Orszag] and freezing all tax rates, coupled with cutting federal spending to where it was before all the bailouts, government takeovers and 'stimulus' spending sprees."

The president isn't just facing a tough go with Republicans and other voting blocs -- especially independents -- but from fellow Democrats.

Obama has accused Republicans of holding middle-class income tax cuts "hostage" by tying them to an extension of Bush-era tax cuts for wealthier Americans. But Democratic senators, and even one former top White House aide, are against letting the tax cuts for top earners expire.

Sens. Ben Nelson of Nebraska, Evan Bayh of Indiana, Kent Conrad of North Dakota, all Democrats, and Joe Lieberman, a Connecticut independent, have each publicly expressed concern about the impact of raising taxes, even on the well-to-do, during an economic downturn.

"The general rule of thumb would be you don't want to do tax changes, tax increases ... until the recovery is on more solid ground," Conrad said recently, summarizing these lawmakers' view.

Each has said the tax cuts should be extended at least temporarily.

Meanwhile, former White House budget director Peter Orszag recently found himself on the opposite side of the debate from Obama.

In a New York Times op-ed this week, Orszag said that not extending the tax cuts for the rich would "make an already stagnating jobs market worse over the next year or two."

But Orszag also argued for a compromise: All of the Bush tax cuts would be extended for two years but then ended altogether.

Obama, shortly after the op-ed, repeated his belief that the Bush tax cuts for the top earner must expire.

Recent polls have suggested that Americans are not only overwhelmingly concerned about the state of the economy -- but do not approve of the way Democrats and Obama are handling it.

The Republicans' edge is a big shift from last year, when Democrats held an advantage of 52 percent to 39 percent. The GOP leads 51 percent to 32 percent on the economy among Independents, and the party has a 9-point advantage on the issue among voters 65 and older.

Democrats and union activists are urging Obama to present a clearer, more coherent message when it comes to the economy.

Read more about concerns on the message

"It just seems like there's a disconnect right now with how Obama is trying to move his agenda and how it really will help people," said Tony Helfer, president of the United Food and Commercial Workers Local 23 during the Pittsburgh Labor Day Parade on Monday.

"I wish we would get a clear message is what I would say. The accomplishments that have been made so far have been spun around to seem like they're negatives, and they're not. So that tells me the word is not getting out, it's not being clear."

"I think that's one of the things that's making the public uneasy about the Democratic Party right now -- that there hasn't been a consistent message on the economy," Altmire said.