Marco Rubio: 'I represent the things I stand for' 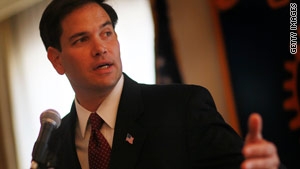 Miami, Florida (CNN) -- For Marco Rubio, life was simpler when it was tea time all the time.

When he was gunning for the Republican nomination for the U.S. Senate in Florida, the former speaker of the Florida House of Representatives aggressively courted the state's conservative Tea Party activists. That strategy worked. Rubio was suddenly a Tea Party favorite. His stunning rise in the polls forced Florida's more moderate governor, Charlie Crist, to bolt the GOP primary to run as an independent.

But the race is now more complicated, with Rubio competing in a three-way battle royal against both Crist and the Democratic nominee, South Florida Rep. Kendrick Meek.

Rubio's grass-roots campaign has put together a team of high-powered Washington and Texas-based GOP consultants. Over the summer, this son of Cuban exiles distanced himself from Tea Partiers on one of the conservative movement's key issues, Arizona's tough anti-illegal immigration law.

Still, Rubio doesn't want even the amended Arizona legislation to become the law of the land. "I don't think the Arizona bill should serve as a model for the rest of the country," he added.

In an interview with CNN, Rubio blamed both parties for the nation's problems and said he plans to be his own man if elected to the Senate. "I represent the things I stand for," Rubio said.

Tea Party activists in Florida still support Rubio. But one of the movement's leaders, South Florida Tea Party Chairman Everett Wilkinson, says he will be watching Rubio's moves closely. "When you send a politician to Washington, you're always worried whether you're going to get the same guy back," Wilkinson said.

One of the biggest worries among Tea Partiers is that Rubio will be another Scott Brown. The Massachusetts Republican had the backing of the Tea Party in his race to replace the late Sen. Ted Kennedy. But as a senator, Brown has shown his own independent streak and has voted on occasion with the Democrats. Not to fear, says Rubio, who is set to speak at a Tea Party rally in Florida later this month.

But the 39-year-old Republican nominee has good reason to consider a move to the political middle in this swing state. Crist's new ads tout the governor as a fresh independent voice, forcing both Rubio and Meek to defend their respective political bases.

That's created a fascinating sideshow in this three-ring political circus: an alliance of sorts between the Tea Party-backed Rubio and Meek. Nearly every day, both the Rubio and Meek campaigns send out e-mails blasting Crist. One of Meek's e-mails showcases a recent newspaper editorial in Florida that slammed Crist as a "campaign chameleon."

"Charlie Crist is trying to be indefinable in this race. And that has an expiration date on it. And that date has come and passed," Meek said in an interview with CNN. Crist declined to be interviewed for this story.

"I think people deserve to know what the next U.S. senator from Florida is going to be about," Rubio said. "The last thing we need in Florida is a political opportunist."