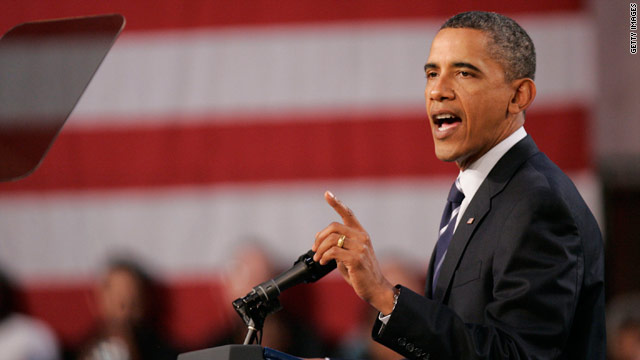 (CNN) -- President Obama opened the post-Labor Day stretch of the midterm campaign in the perennial swing state of Ohio on Wednesday, accusing the GOP of pushing bankrupt economic policies and putting politics ahead of national welfare.

He pushed a new $350 billion plan to lift the sagging economy, including $200 billion in tax cuts for businesses to purchase new equipment and write off 100 percent of new investments through the end of 2011.

The president also highlighted a $50 billion proposal for infrastructure investment, as well as $100 billion to permanently extend tax credits to businesses for research and development.

He stood by his plan to allow the Bush tax cuts to expire for people making over $250,000, while extending the cuts for those making less.

Obama refused to use the word "stimulus" to describe his new proposals. Republicans have repeatedly savaged the White House for the controversial $862 billion recovery stimulus plan passed last year, arguing that it ballooned the deficit while failing to revive the economy.

The Ohio Republican -- in line to become House speaker if the GOP wins control of Congress -- has rejected new ideas and embraced "the same philosophy we already tried for the last decade -- the same philosophy that led to this mess in the first place," Obama told a crowd outside Cleveland.

Boehner and other Republicans are trying to ride a wave of "fear and anger all the way to Election Day," Obama said.

The election is about "fear versus hope (and) the past versus the future. It's still a choice between sliding backward and moving forward. That's what this election is about. That's the choice you'll face in November."

Boehner immediately lashed back at Obama, declaring in a written statement that if the president "is serious about finally focusing on jobs, a good start would be taking the advice of his recently departed budget director and freezing all tax rates, coupled with cutting federal spending to where it was before all the bailouts, government takeovers, and 'stimulus' spending sprees."

Former White House Budget Director Peter Orszag recently offered an alternative to Obama's plan on the issue of whether the Bush tax cuts for the wealthy should be scrapped, asserting in a New York Times op-ed that failing to extend the tax cuts for the rich over the next couple of years would make an "already stagnating jobs market worse."

Orszag, however, proposed allowing all of the Bush tax cuts to expire after two more years.