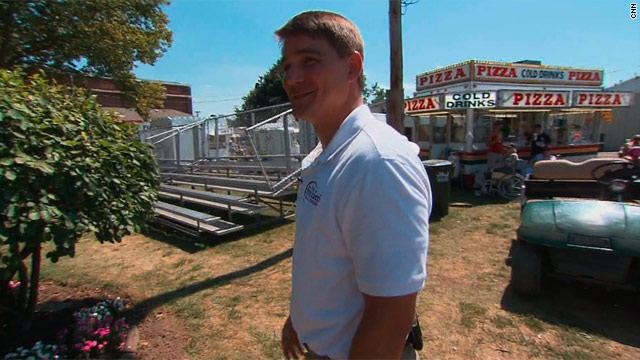 Canton, Ohio (CNN) -- The broken windows and dilapidated walls of the abandoned Hercules engine plant is not just an eyesore for those who live here. It's a symbol of seemingly constant disappointment in this hard-hit district.

The factory was a good source of jobs in this community for generations until it shut down a decade ago. A few years ago, there was hope -- a $178 million plan to breathe new life into the huge empty complex with retail shops and apartments. But when the financial system neared collapsed and the credit market froze, the project came to a screeching halt.

Down the road at the Stark County Fair, first-term Democratic Rep. John Boccieri says the policies of the past are to blame.

"When I see that shuttered factory, I'm reminded of our trade deals that were allowed to happen. That didn't happen in 20 months. That happened over years and decades of lack of focus on the American worker and American businesses," the congressman said.

Boccieri's district was represented by Republicans for nearly 60 years before he won in 2008. But voters here went for John McCain for president, not Barack Obama.

Now, Republicans are counting on winning back this seat in their quest for taking control of the House of Representatives. It's no surprise that the GOP challenger, Jim Renacci, is running against Boccieri in this conservative district by tying him to more liberal Democratic leaders in Washington.

After voting no on the first House health care bill and being very publicly torn about the final legislation, Boccieri decided to vote yes. He also voted for other big Obama priorities that are controversial here, from the nearly $862 billion stimulus bill, to cap and trade legislation that later stalled in the Senate.

The Democrat is not running on those issues, but he has also settled on a strategy to not run from them.

"I'm not ashamed of any votes that I've taken. I campaigned on reforming our health care system. I campaigned on finding a national energy policy. At the end of the day, people vote for me to be their congressman, not some congresswoman in California or the president," Boccieri said.

Democratic strategists say internal polls show the race between Boccieri and Renacci very close, which they are privately surprised about given the dismal environment in such a conservative, traditionally Republican district.

Noticeably absent from Boccieri's campaign cards that aides are handing out at the political tent is any mention of the president or his leadership in Congress. In fact, it misses the word "Democrat" entirely.

When asked about that, Boccieri said, "We may wear a jersey on the field, but we're all playing for America."

He also insisted he has "no problem telling people who come up to me that I'm running as a Democrat."

Overcoming frustration with Democratic leadership in Washington is no easy task for Boccieri, but as we followed the boyish-looking former Air Force pilot and Iraq war veteran around the fair, one voter he stopped to talk to should give him hope.

Bill Keating voted for President Obama and says he regrets it because "he hasn't addressed any of the issues he campaigned on," especially the economy.

But Keating said he is willing to give Boccieri another chance.

"You can't fault the man at a first term," he said.

Still, beyond the festive atmosphere of Ferris wheels, roller coasters and cotton candy, there is evidence of the economic despair that is driving this election.

Nicole Glass was working the sausage truck, with no customers.

"We have to inflate our prices to pay for our products, and people have a hard time spending money on a sandwich that costs five dollars," Glass said.

She voted for Obama, too, and isn't sure whether she'll support Boccieri in November.

"I'm a Democrat and who's right and who's wrong I don't know. But everyone needs to focus on the big picture," Glass said.

Walking past the rides and the food vendors struggling for business, Boccieri avoids criticizing the president and Democratic congressional leaders the way other endangered Democrats are doing. Instead, he pleads for patience.

"It's very clear that the economic solutions and the investments that we've made are going to take time to recover," he says.

He talks about a ribbon-cutting at a local YWCA, which he says was helped by stimulus dollars he supported.

"Those are real projects that we cite that we're putting folks back to work. No, it's not fast enough. It needs to be faster, and we need to do more to help jump-start the economy," Boccieri admitted.

His Republican opponent, a former mayor and local businessman spending his own money on the race, is running as an outsider with real-world experience.

"I've had 27 years of experience in business. I've created over 1,500 jobs and employed over 3,000 people," Renacci told us as he, too, works voters at the fair, "This election is all about jobs. We are losing jobs in this district. We're losing jobs around the country. And with me, you have someone who has created a job," he said.

He rails about excess spending contributing to the sky-high deficit.

Asked where he would cut, Renacci responded that he likes the idea of an across-the-board cap on statutory spending, and even said he would save federal dollars by taking down the signs around the country highlighting projects using stimulus dollars.

"We spend millions of dollars on signs promoting that we're putting dollars back into the economy. How about, let's not put those signs up? "offered Renacci.

It's unclear if that idea is going to win him many votes, but we did hear this from a voter who would only identify himself as Dan: "I think we spend too much money, and I don't particularly like what's going on [in Washington]. All you can do is go to the polls and vote your conscience."