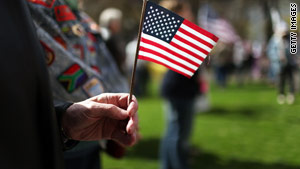 "Independents and voters who dislike both parties are starting to break toward the GOP," says CNN's Keating Holland.
STORY HIGHLIGHTS
RELATED TOPICS

(CNN) -- With November's midterm elections less than two months away, a new national poll indicates that the Republicans' advantage over the Democrats in the battle for Congress is on the rise.

According to a CNN/Opinion Research Corporation survey released Monday, the GOP leads the Democrats by 7 points on the "generic ballot" question, 52 percent to 45 percent. That 7-point advantage is up from a 3-point margin last month.

The generic ballot question asks respondents if they would vote for a Democrat or Republican in their congressional district, without naming any specific candidates.

"The survey indicates that independents and voters who dislike both parties are starting to break toward the GOP," says CNN Polling Director Keating Holland. "In a year when anger at incumbents is a dominant political force, the key to the election lies among those who aren't rooting for either side."

According to the poll, the two parties are equally unpopular. Forty-nine percent of all Americans have an unfavorable view of the Democrats, with the same percentage feeling the same way about the Republicans. Just over one in five questioned dislike both parties.

Back in April, Americans who dislike both parties appeared to mildly favor the GOP on the generic ballot, by a 43-to-39 percent margin, with a large number saying at the time that they would pick a minor-party candidate or stay at home.

"Now, a lot of those voters appear to be bolting to the GOP," Holland said. "Republicans now have a whopping 38-point advantage on the generic ballot among voters who dislike both parties."

"It's not surprising that those two groups are voting the same way, since almost by definition independents don't like either party," says Holland.

What will the "Obama factor" be in November? The poll indicates that most say that their vote for Congress will not be intended as a message for the president.

"Among those who plan to send a message with their vote this fall, Obama is having a negative effect but nothing like the effect George W. Bush had on Republican candidates in 2006," says Holland.

The CNN/Opinion Research Corporation poll was conducted September 1-2, with 1,024 adult Americans questioned by telephone. The survey's overall sampling error is plus or minus three percentage points.