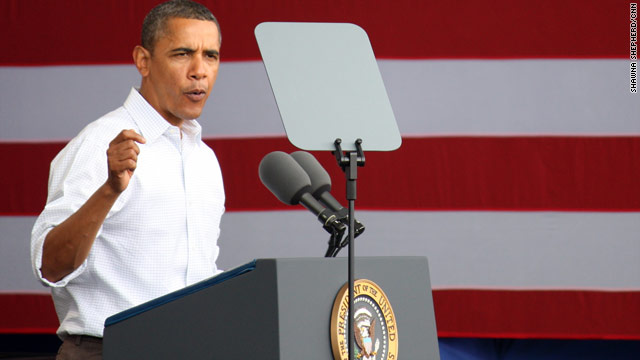 (CNN) -- President Barack Obama is rushing to roll out a new economic plan this week, but his fellow Democrats are confronting a difficult question: Is it too little, too late?

On one hand, Obama used a Labor Day speech in Milwaukee, Wisconsin, to suggest he wasn't rattled about the economic crisis that might wipe out Democratic majorities in the House and Senate in less than two months.

"Now, the plain truth is, there's no silver bullet or quick fix to the problem," he said.

But on the other hand, Obama certainly sounded like a president trying to use the roll-out of his new plan to convince voters he's all over the problem.

"I'm going to keep fighting, every single day, to turn this economy around; to put our people back to work; to renew the American dream for your families and for future generations," Obama said.

There's certainly urgency to the situation because panic is starting to set in privately among some Democratic strategists if the American people don't see economic improvement by November.

So in Milwaukee, Obama unveiled a $50 billion infrastructure plan to try and create jobs over the long-term by rebuilding 150,000 miles of roads, 4,000 miles of rail, and 150 miles of airport runways.

Then on Wednesday in Cleveland, according to an administration official, the president will announce a $100 billion plan to permanently extend the tax credit for research and development, hoping to spur companies to invest in their businesses by buying more equipment and hiring more workers.

But the fact is it's unlikely that Congress will pass either proposal in the narrow window of a few weeks that lawmakers will be working this fall. And even if Congress miraculously came together to pass these initiatives, they would not have much of any impact this year anyway.

On a conference call with reporters on Monday, a senior administration official acknowledged that the infrastructure package will not add any new jobs until at least 2011.

"This is not a stimulus, immediate-jobs plan," one senior official said. "This is a six-year reauthorization (of transportation projects) that is front-loaded" with money to try and spark the economy once Congress passes it.

But the president seemed to be promising the opposite in Milwaukee in terms of impact, perhaps raising expectations too high.

"All of this will not only create jobs now, but will make our economy run better over the long haul," Obama said, according to his prepared remarks. "It's a plan that history tells us can and should attract bipartisan support. It's a plan that says even in the still-smoldering aftermath of the worst recession in our lifetimes, America can act to shape our own destiny, to move this country forward, to leave our children something better -- something lasting."

The sudden flurry of activity has led Republicans like Sen. John McCain, R-Arizona, to charge the president is "just flailing around" and trying to show a lot of activity on the eve of the midterm elections to try and bail out Democrats.

"We always like to see deathbed conversions," McCain said on "Fox News Sunday" about Obama's latest economic plan. "The fact is, if we'd have done this kind of thing nearly a couple of years ago, we'd be in better shape."

White House officials completely reject the notion that they've had any sort of conversion or are "flailing around" for answers, pointing out there has been a heavy focus on turning around the economy with passage of the $787 billion economic stimulus plan within the first 100 days of the new administration.

"I would say within a month of President Obama coming into office, he signed the largest increase in infrastructure since President Eisenhower established the interstate highway system," said a senior administration official. "The Secretary of Transportation and the Vice President have all been working tirelessly to make sure we are investing that money quickly and wisely."

And in fairness to the White House, there have been reports conducted by nonpartisan officials like the Congressional Budget Office, as well as private economists outside the administration, suggesting the Recovery Act has saved or created 3.3 million jobs over the last year and a half.

The problem for the president is due in part to the high expectations set by the White House itself, which originally billed the stimulus as something that would jolt the economy, which didn't quite pan out. Then they talked about giving the stimulus more time because it was always intended to be paid out over two years, and they decided to bill July and August as "Recovery Summer" to suggest the impact was finally starting to reach real people.

But the latest CNN/Opinion Research Corporation Poll suggests the American people are still just not feeling any sort of recovery. When asked about economic conditions today, 81 percent said the conditions are "poor" while only 18 percent said they're "good" at this point.

Just as problematic is the fact that when asked how the current economic conditions compare to two years ago -- before the stimulus package was passed -- 49 percent said it's "as bad or worse," while 18 percent said it's "better now but will get worse" in the future. Only 32 percent of respondents said that when compared to two years ago, the economy is "better now and will stay that way."

That's why when the president talks this week about the targeted tax cut as well as infrastructure spending -- two key ingredients of the recovery plan last year -- some Americans may feel like they've heard the same sales pitch before and the original didn't quite work out as advertised.

The other challenge for the president is the fact that Americans have also heard him say many times before that he's "focusing on the economy" -- only to see him spend months and months on health care reform earlier in his presidency. And then after health care passed, the promises of a "hard pivot" back to jobs have only been eclipsed time and again by big issues like last week's big Iraq speech from the Oval Office and the push for Mideast peace.

To be sure, some of the criticism of the president's focus on foreign policy has been ridiculous. After all, he's the commander-in-chief, not the economist-in-chief, so it's sort of absurd to suggest that he should not have spent time thanking U.S. troops last week and talking directly to the American people about an important turning point to the mission in Iraq.

Likewise, Obama would have been derelict in his duty if he had ignored an historic opportunity to try and forge Mideast peace by saying he wanted to spend more time on the domestic economy. For the first time in nearly two years, Israeli and Palestinian leaders were willing to sit down for direct talks, so this was a rare opportunity for the American president to try and push it along. The peace initiative may ultimately fail, but he at least has to try.

But there have also been times when the president has waded into controversies, like the mosque issue in New York City, that have only pulled him off his message on jobs. And despite the bad news for Obama in CNN's latest poll, there's also a surprising revelation that suggests there's still a chance the President could turn this election year narrative around.

The poll shows that more Americans hold the Republicans responsible for the economic mess than the Democrats, with 44 percent blaming the GOP and 35 percent picking the Democrats. And when the name of former President George W. Bush is added to the conversation, the number who blame the Republicans rises to 53 percent, with just a third of respondents saying Obama and his party are at fault.

Those numbers explain why Democrats will be mentioning the "Bush" name every chance they can get in the final two months leading up to the election. But the numbers also raise a question: Why haven't the Democrats been able to do a better job of making the case for their own policies to save the economy?

On the morning after the election, Democratic insiders at the White House and on Capitol Hill may be wondering to themselves about an historic missed opportunity.