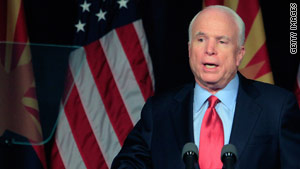 (CNN) -- Republican Sen. John McCain on Sunday invited President Barack Obama to visit the border with Mexico to get a complete picture of the region and called on the president to do more for security.

Securing the border must be a priority for the current administration, he said.

"I'd love for the president to come and visit the border. Unfortunately, he hasn't had time to do so," McCain said.

Congress recently has passed some measures, including $600 million to pay for 1,500 National Guard troops to the border as well as two unmanned drones to patrol the area.

On Sunday, McCain said, "Oh, I think there's been something done right. But the fact is that we haven't got a secure border. We need more fence. We need more surveillance capability."

The drug cartel violence south of the border will spill over onto the U.S. side if security isn't ramped up, he said. The people who live in southern Arizona do not have a secure environment, he added.

McCain cited an instance where the police chief of Nogales, Arizona, was told that his police officers will be killed if they interfere with the drug cartels.

The former Republican presidential nominee also addressed speculation of tax cuts for businesses to boost hiring and investment by the Obama administration.

"My reaction is that we always like to see deathbed conversions, but the fact is if we'd had done this kind of thing nearly a couple years ago we'd be in a lot better shape," he said.

What he has heard from his constituents, particularly small and large business people, is that they are hurting and want some kind of certainty, he said.

The upcoming midterm elections could be "seismic," he predicted, "But we've got to give Americans a reason to be for us rather than be just against the Democrats and the president."

To that end, McCain praised members of the Tea Party members for invigorating the base.