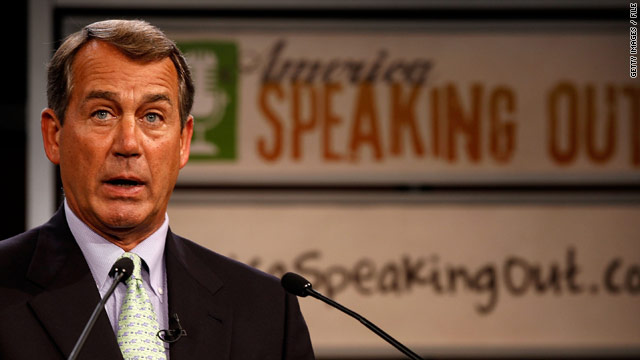 Washington (CNN) -- In twin speeches laced with heavy doses of "I-told-you-so," Republican leaders in the House and Senate tried to convince voters Tuesday that America's success in Iraq is not because of President Barack Obama, but in spite of him.

"One lawmaker rejected the idea that the surge would reduce violence in Iraq, saying -- and again I'm quoting -- 'in fact, I think it will do the reverse.'"

The lawmaker Boehner is referring to is then-Sen. Barack Obama. Boehner aides said he was reluctant to criticize the commander-in-chief by name in front of a roomful of veterans, but insisted it would be clear who he was talking about.

"Today we mark not the defeat those voices anticipated -- but progress. And I want to thank President Obama for setting aside his past political rhetoric and recognizing the importance of the surge and the diplomatic agreement signed by President [George W.] Bush and Prime Minister [Nuri al-] Maliki," Boehner said.

In a speech in his home state of Kentucky, Senate Republican Leader Mitch McConnell was more direct in his criticism.

GOP aides said the coordinated message, in advance of Obama's prime time address, was to remind voters that, in the words of one aide, "we took a lot of crap for sticking our necks out and supporting the surge when it was unpopular but necessary. We funded the troops when Obama/ [Joe] Biden/ [Hillary] Clinton were racing each other to see who could defund them the fastest, and now those same people want to take credit for everything they fought against."

This is Boehner's second big policy speech in as many weeks. Aides admit he is trying to raise his profile, laying the groundwork to become speaker of the House should Republicans win back the majority in November.

However, as with last week's speech on the economy, this was heavy on criticism of Obama and Democrats and light on substantive policies Republicans would offer if they were in control.

GOP aides insist they will formally lay out their agenda in a few weeks.

In his speech, Boehner also called Afghanistan "not just one of 'two wars' -- it is central to the global struggle against extremism and intolerance."

The House minority leader repeated his criticism of what he calls Obama's "arbitrary deadline" for withdrawal in Afghanistan.

"Using campaign promises as a yardstick to measure success in Iraq and Afghanistan runs the risk of triggering artificial victory laps and premature withdrawal dates unconnected to conditions on the ground," he said.

Although Boehner's speech was billed as an address about national security, he and his aides know the economy is what is driving the election just two months away, so he began by talking to the veterans about jobs and the economy.

"Stimulus spending sprees, permanent bailouts, federal mandates and government takeovers have failed this nation and have failed our veterans. It's time for a fresh start so that every man and woman who has donned the uniform of our nation knows that when they leave the service, the opportunity for a good job in the private sector awaits them."

Boehner was also tough on the president on another issue voters call high on their list of concerns: terrorism.

"We see signs of a return to this pre-9/11 mentality in proposals to house terrorists on American soil just to fulfill a political promise," Boehner said. "We are a nation at war. A patchwork of political promises does not represent a coherent strategy to confront and defeat the terrorist threat."

Obama is scheduled to deliver an Oval Office address to the nation on Tuesday night marking the end of U.S. combat operations in Iraq. The speech -- set to start at 8 p.m. ET -- is expected to last about 15 minutes.

The remaining American troops will train, assist and advise the Iraqis.