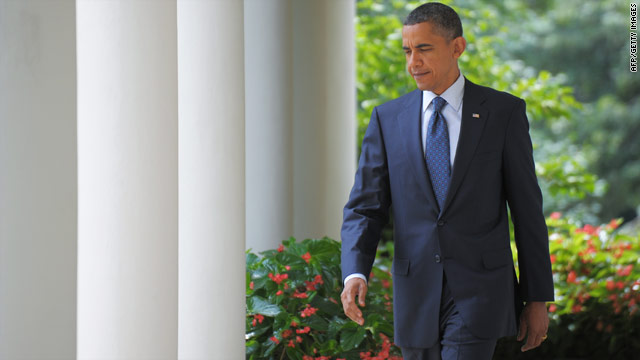 Analysts say there are actions President Obama can take to minimize expected losses for Democrats in November.
STORY HIGHLIGHTS

(CNN) -- President Obama is facing criticism that his message has gone off track at a crucial time for his party and administration. With the midterm elections just 10 weeks away, the president's approval ratings are at their lowest. Analysts are predicting big wins for Republicans in November.

Ten weeks is an eternity in politics, and Republican and Democratic strategists say there are some key things Obama can do in the final stretch to restore the confidence of the American people and minimize expected losses for his party.

Candidate Obama inspired voters in the 2008 election with a simple message of hope and change. Halfway through his term, the president now faces the complex reality of governing.

Despite the administration's full plate, strategists say Obama needs to return to the focus and discipline that helped him win the presidency.

"What should the message be? There should be three messages: Jobs, jobs, jobs," he added.

"It's a question of every day doing something on the economy and making sure that the news headlines are related to that," he said.

"He focused and simplified the message. He communicated it. He built a consensus. He defined America's role in the world, and that's the challenge here," he said.

Once Obama has honed his message, he should take it directly to the people in news conferences, said Morey, vice chairman of the Core Strategy Group.

"Nobody was better at that. I'm not sure why somebody with that intellect and those communications talents should be so tightly scripted."

"There is a great hunger for leaders who can rise above the political pettiness and tell the truth," Morey said, pointing to New Jersey Gov. Chris Christie as an example.

Since then, Christie has slashed the state's budget and proved he doesn't answer to his party alone. So far, the voters like him for it. A Quinnipiac survey released last week shows 61 percent of independents approve of how he's handling his job.

4. Go on the offense

"With barely an exception, the administration should stop equivocating, parsing and reacting," Morey said.

In an era of 24/7 analysis on the television and online, it's easy for a president to get caught up in the day-to-day distractions and mudslinging.

When sideshow issues pop up, the president must rise above them.

"I think it's time to do the thing he does in 2008 better than any candidate I've ever seen -- transcend," Morey said.

"Ignore your opponents, ignore cable TV, ignore the extreme left and right. And play your game. Fight your fight for this election."

"This election, for better or for worse, depends on how hard the president fights between now and Election Day," former Democratic National Committee Chairman Howard Dean said Sunday on CNN's "State of the Union."

The president sets the tone, Dean said, "and for the president to be out there fighting, as he has been for the last two or three weeks, and sounding like Harry Truman, people love that stuff. They want to see a fighter. They want to see strength in their leaders, and I think President Obama is showing that strength."

Despite the president's low job-approval ratings, polls show most people like him personally. And, Arterton notes, Obama's fundraising ability is a big boost for Democratic candidates.

The American people want to hear what Obama is for instead of what he's against, said Ron Christie, a Republican strategist who worked in the Bush administration from 2001 to 2004.

Disenchantment with Washington is high, and voters are looking to be inspired instead of angered.

7. Look to the future, not the past

Obama likes to point the finger at Republicans and the Bush administration for "driving the economy into a ditch."

While that can be part of his message, it shouldn't be the whole thing, Morey said.

"Elections ultimately are about the future, not the past. The Democratic Party is going to have to get onto the future jobs-centric growth plan," he said. "They can start with a question of the past, but boy, that's not a way to win an election, and it's certainly not a way to govern once you win an election."

It's necessary to fire up the base, but the independents are the ones with the power to swing the election.

"The current snapshot has a clear message: Democrats should be afraid, very afraid," John Avlon wrote in a column for CNN.com.

The party in power usually loses seats in midterm elections. The question this year is, "How many?"

If Democrats lose control of the House -- or if their majority is just weakened -- Obama should be prepared to do what President Bush and President Clinton did when their parties suffered big losses. They took responsibility and showed a willingness to reach across the aisle.

In 1994, Republicans took back control of the House and Senate for the first time in more than 40 years, picking up 40 seats in the House and eight in the Senate.

The best CEOs are able to get people looking beyond their quarterly earnings and even their annual performances.
--David Morey, communications expert
RELATED TOPICS

"I'm the president. I'm the leader of the efforts that we have made in the last two years, and to whatever extent we didn't do what the people wanted us to do or they were not aware of what we had done, I must certainly bear my share of responsibility," Clinton said the following day.

Twelve years later, when Democrats took back both chambers, Bush admitted his disappointment and said, "The message yesterday was clear: The American people want their leaders in Washington to set aside partisan differences."

Whatever happens at the polls, Obama will need to digest the message from the public and adapt accordingly.

"President Obama has to heed the message that voters send him," Christie said. "He's not the Democratic president or the Republican president -- he is the president of the American people."

"This is the most important election in American history because it's the next election, which is always true," Arterton said.

Though a lot has changed since Obama was elected, he's not even halfway through his term. The midterms are important, but no matter what the outcome, Obama will still be president for another two years, and it's up to him to get the public focused on the future of the country and not politics.

"The best CEOs are able to get people looking beyond their quarterly earnings and even their annual performances," Morey said.

"He needs to get people looking beyond the daily, monthly polling and even beyond this midterm election."