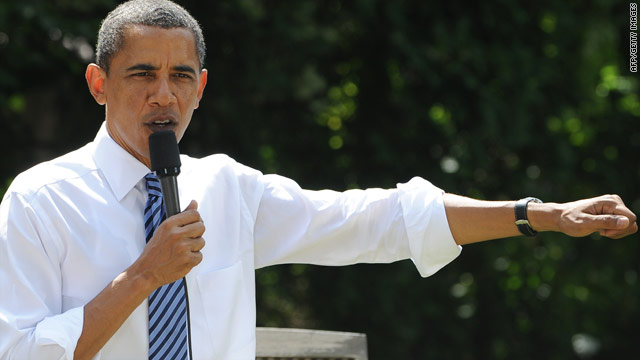 Washington (CNN) -- With the approach of congressional elections and the midpoint of what he hopes will be his first of two four-year terms, President Barack Obama is honing a humor-laced stump speech that is part pep talk, part populist ideology.

Obama delivered similar versions of the speech at six fundraising events this week, kicking into full campaign mode with calls to continue the progress made so far by his administration.

His poll numbers are shrinking, and Democrats are resigned to losing some congressional seats in November.

Amid unabated criticism from the political right and unyielding legislative opposition by Republicans, the White House wants to galvanize the liberal base and maintain support from independents vital to Obama's election but who polls show turning away.

The basic premise of the president's stump speech message is that his administration inherited a mess after eight years of Republican leadership and needs more time to fully fix it while also positioning America to prosper in coming generations.

Republicans complain Obama's repeated references to problems he inherited are intended to duck responsibility for what they call failures of his own policies that have allowed unemployment to remain high amid a sluggish recovery.

Obama, however, insists that full economic recovery from such a deep recession will take years, and that his administration has so far laid the basis for continued improvement while addressing longstanding problems

Overall, though, the lingering message is that the GOP screwed up when in power, and now Democrats are making things right.

Partisan rhetoric and jokes abound. In almost every speech, Obama says Republicans are counting on voter amnesia about GOP policies that led to the Wall Street meltdown and economic recession.

He acknowledges some of his polices have been unpopular, particularly bailing out big banks and automakers.

"I actually have pollsters, so I know when things aren't popular," he said Tuesday at an event for Washington Sen. Patty Murray, repeating an oft-used line that always prompts laughter and applause. "I know when they don't poll well. But I was not sent to Washington just to do what was popular. I was sent to do what was right."

Noting his campaign rally cry of "Yes we can," he lampoons what he calls the obstructionism of congressional Republicans by dropping his voice into a kind of growl to mimic what he offers as their slogan: "No we can't."

"That's really inspiring," he deadpanned to laughter and applause at the Murray event.

"This vision they have for the future," Obama continued, pausing to add, "Gives you a little pep in your step when you hear it, don't you?" before adding a final "No, we can't."

When he's really revved up, Obama shifts to the car-in-a-ditch analogy.

Specific words change a little each time, but the message is unwavering: Republicans drove the American economy off the road through failed policies of tax cuts, deregulation and increased spending, and now his administration is getting it out of the ditch.

With Obama, it's all in the delivery.

"They spent almost a decade driving the economy into a ditch," he said Tuesday, pausing several times as laughter erupted. "And so me and Patty, and a bunch of others, we go down there and we put on our boots and we're pushing and shoving. And it's muddy and there are bugs and we're sweating and shoving, pushing hard."

The Republicans, meanwhile, are standing by "sipping Slurpees" and calling out "you're not pushing hard enough" and "that's not the right way to push," Obama continued, pretending to sip a Slurpee to laughter and applause.

"So finally, finally, Patty and I and everybody, we finally get the car up on level ground. We're about to go forward," Obama said. "And these guys come and tap us on the shoulder, and they say, 'We want the keys back.' "

He shouted over the roaring laughter to deliver his punch line: "You can't have the keys back! You don't know how to drive!"

"You notice, when you want to move forward in your car, what do you do?" he said Tuesday. "You put your car in 'D.' When you want to go backwards, you put it in 'R.' "

With the crowd applauding, he declared: "Back into the ditch. Keep that in mind in November. That's not a coincidence."

Along with the humor comes more stern rhetoric that depicts Republicans as the enemy of ordinary citizens.

On Tuesday, he described the basic GOP philosophy as cutting taxes for "millionaires and billionaires" who don't need it, cutting rules for special interests, gutting regulations that protect clean air and clean water "and things that most of us value," and then cutting "working folks loose to fend for themselves."

"So if you can't find a job or you can't afford college or don't have health insurance, tough luck -- you are on your own," Obama continued. "Now, if you're a Wall Street bank or an insurance company or an oil company like BP, come on in, help us write the regulations."

The American people tried those policies for eight years under the previous GOP administration, Obama said, adding: "And it didn't work."

"It gave us record deficits and ultimately led to the worst economic crisis since the Great Depression," he said.

"Now, I bring all this stuff up not because I want to re-litigate the past," Obama said as applause erupted. "I just don't want to relive the past."

Republicans, he said, are "counting on the fact that you don't remember; that you're going to forget what happened when they were in charge for eight years."

"So that's the choice in this election," Obama said. "Do we go back to the policies that got us into this mess, or do we keep moving forward? I believe we move forward. America always moves forward."