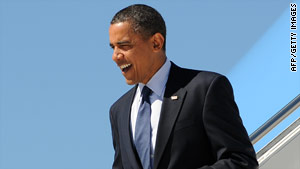 The White House has tried to clarify President Obama's remarks on the mosque issue since his initial speech.

Washington (CNN) -- By wading into the issue of an Islamic center and mosque near ground zero, President Barack Obama provided Republicans with an emotion-ridden attack vehicle while diverting attention from campaign themes of fellow Democrats.

A senior Republican strategist told CNN that GOP candidates are being encouraged to talk about the issue as much as possible.

In Florida, Republican gubernatorial candidate Rick Scott launched a statewide television ad Monday criticizing Obama for backing the right of Muslims to build an Islamic center and mosque two blocks from where the September 11, 2001, terrorist attacks killed more than 2,700 people.

"Barack Obama says building a mosque at ground zero is about tolerance," Scott says in the ad, looking directly into the camera. "He's wrong. It's about truth."

The "truth," Scott claims, is this: "Muslim fanatics murdered thousands of innocent Americans on 9/11, just yards from the proposed mosque."

"The fight against terrorism isn't over," Scott concludes. "Mr. President, ground zero is the wrong place for a mosque."

Meanwhile, a House Democratic leadership aide said the issue was dominating the political conversation when Democrats need to stress campaign themes such as economic recovery and saving social security.

"We understand why the president would want to talk about this issue, but the timing couldn't have been any worse," the House Democratic leadership aide told CNN.

Despite the concerns of Democrats, Senate Majority Leader Harry Reid of Nevada on Monday came out against building the Islamic center and mosque.

"The First Amendment protects freedom of religion. Sen. Reid respects that but thinks that the mosque should be built some place else," said a statement issued by Reid's spokesman, Jim Manley.

Reid is involved in a tough re-election campaign against conservative Republican Sharron Angle. The statement on the ground zero issue also called for Republicans to back a Democratic bill that would provide health care aid and compensation for firefighters, police officers and other first responders to the 9/11 attacks.

For its part, the White House sought to tamp down the discussion Monday. Speaking to reporters, White House spokesman Bill Burton sidestepped a question on Republican strategy and tried to declare the debate over.

"The president didn't do this because of the politics," Burton said, adding: "I think that it's a debate that was had and we've weighed in."

On Sunday, the topic dominated morning talk shows, with Republicans calling Obama insensitive for supporting the right of Muslims to build the Islamic center so close to ground zero.

In his speech at a White House dinner Friday marking the start of the Islamic holy month of Ramadan, Obama said Muslims "have the same right to practice their religion as anyone else in this country."

Both the topic and Obama'sneed to clarify his initial remarks evoked criticism from Republicans.

Sen. John Cornyn, R-Texas, told "FOX News Sunday" that Obama's stance demonstrated how "Washington, the White House, the administration, the president himself seems to be disconnected from the mainstream of America."

"This is sort of the dichotomy that people sense, that they're being lectured to -- not listened to -- and I think that's the reason why a lot of people are very upset with Washington," Cornyn said.

"If the president was going to get into this, he should have been much more clear, much more precise, and you can't be changing your position from day to day on an issue which does go to our Constitution, and it also goes to extreme sensitivity," King said.

Democrats responded that critics fail to distinguish between the al Qaeda terrorists who carried out the 9/11 attacks and the Islam religion, which includes peaceful adherents all over the world, including the United States.

The House Democratic leadership aide lamented that the topic was getting so much attention.

"We were supposed to be talking about Social Security in this coming week," the aide said, referring to Democratic criticism of Republican calls to privatize the government-run pension program. "This is a really good issue for us. And instead, we're talking about the mosque."