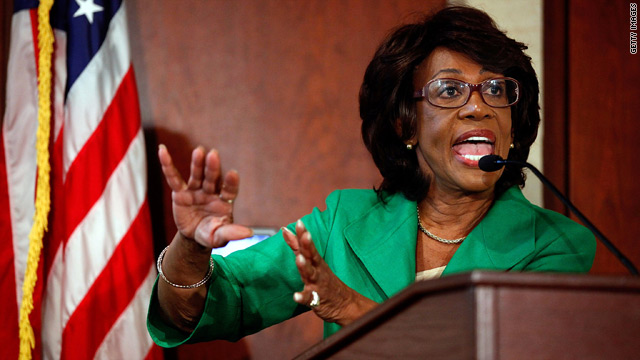 Washington (CNN) -- A defiant Rep. Maxine Waters, D-California, insisted Friday that neither she nor her staff broke any House rules.

Waters also blasted the House ethics committee for failing to schedule a trial to resolve allegations she helped steer federal bailout money to Massachusetts-based OneUnited Bank -- in which her husband had a financial stake.

She repeatedly denied any wrongdoing, and insisted she will not cut a deal with the committee.

Given the fact that the committee's investigation has now lasted for over a year, "such a delay is unacceptable," she told reporters at a Capitol Hill news conference that lasted over an hour.

"This case is about fairness," she said. Due process has been denied, and ethics investigators have ignored "key pieces of exculpatory evidence."

Video: Rangel: 'Not asking for leniency'

There was no special "benefit, no improper action, (and) no failure to disclose," she declared. There is "no case."

Waters, a 10-term Los Angeles congresswoman, insisted she was merely trying to arrange assistance for the National Bankers Association, an organization representing more than 100 minority-owned banks.

Much of my work is based on expanding "access for those who are (traditionally) not heard by the decision makers," she said.

Waters, a senior member of the House Financial Services Committee, helped arrange a meeting in September 2008 between OneUnited and Treasury Department officials, according to ethics investigators.

According to an ethics report, Waters' husband owned almost 4,000 shares of OneUnited stock at the time of the meeting. The shares had declined in value from more than $350,000 in June to $175,000 at the end of September -- the height of the Wall Street financial crisis.

Waters, according to a separate preliminary report, called then-Treasury Secretary Henry Paulson "and requested that Treasury Department officials meet with representatives" from the NBA.

"A meeting was in fact granted, however, the discussion at the meeting focused on a single bank -- OneUnited. Rep. Waters' husband had been a board member of the bank from 2004 to 2008 and, at the time of the meeting, was a stock holder of the bank," the report said.

Waters has repeatedly insisted the meeting was set up for NBA -- "for all the minority bankers." She noted Friday that some of the meeting's participants have asserted, contrary to the conclusion of the report, that between "60 and 75 percent" of the conversation focused on the needs of minority banks as a whole.

The ethics report also states that Waters approached Financial Services Committee Chairman Barney Frank, D-Massachusetts, to say that she was "in a predicament because her husband had been involved in the bank, but 'OneUnited people' were coming to her for help."

Waters, "according to [Frank] ... knew she should say no, but it bothered her. It was clear to [Frank] that this was a 'conflict of interest problem.'"

In an interview on the Tom Joyner Show Tuesday, Waters admitted she had spoken to Frank, but described the circumstances much differently than the report.

"I didn't go to him for advice. I went to him and told him, 'These are your constituents. They are headquartered in your district and they are now trying to find TARP. We're representing the National Bankers Association,'" Waters said.

"So then I said, 'Perhaps you need to take a look at this' and he said, 'Fine. Don't worry. You don't have anything to do with this. I will take care of it.' And, as a result of that, he started to work on it." she said.

Waters insisted Friday she "would never take extraordinary steps" to save her husband's investment in OneUnited Bank. She also noted that the September meeting with Treasury officials happened before the Troubled Asset Relief Program -- the pool of bailout money from which OneUnited's $12 million was drawn -- became law.

Ethics investigators have asserted that Waters "agreed to refrain from advocating on behalf of OneUnited," but failed to instruct her chief of staff, Mikael Moore, from doing so.

Following the September 9 meeting between Treasury and National Bankers Association officials, Moore "was actively involved in assisting OneUnited representatives with their request for capital from Treasury and crafting legislation to authorize Treasury to grant the request" for financial assistance, the ethics report said.

"Reasonable" people could construe Moore's "continued involvement in assisting OneUnited as the dispensing of special favors or privileges to OneUnited," the report concluded.

Both Waters and Moore -- who also spoke at Friday's news conference -- have denied that allegation.

"If you're going to wrap this all around creating these violations because I failed to supervise my staff, it doesn't hold water, they don't have any proof of that and I maintain that I want to go to trial or whatever they want to call it -- adjudicatory hearing -- because I think I don't deserve this," Waters said Tuesday.

Waters is the second high-ranking Democrat now facing a public ethics trial this fall. New York Rep. Charlie Rangel, the former chairman of the tax-writing House Ways and Means Committee, has been accused of 13 violations of House rules involving alleged financial wrongdoing and harming the credibility of Congress.

The prospect of inquiries into the two high-profile Democrats has compounded the fears of congressional Democrats nervous about their prospects in mid-term elections in November.