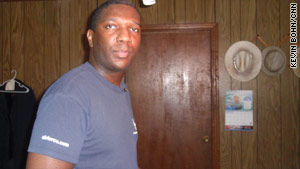 (CNN) -- U.S. Senate nominee Alvin Greene, a political unknown who became the surprise winner of the South Carolina Democratic primary, was indicted Friday by a grand jury on obscenity charges.

Greene was indicted on one felony count of "disseminating, procuring or promoting obscenity," according to the Richland County clerk of courts.

He was also indicted on a misdemeanor count of "communicating an obscene message to another person without consent."

Greene told CNN Senior Political Editor Mark Preston that his lawyer "is dealing" with the indictments.

"In June, I asked Mr. Greene to withdraw his candidacy because of the charges against him. Following today's indictments, I repeat that request," Fowler said.

"It will be impossible for Mr. Greene to address his legal issues and run a statewide campaign. The indictment renews concerns that Mr. Greene cannot represent the values of the Democratic Party or South Carolina voters."

Greene was charged by police in November with showing pornographic material to a female University of South Carolina student on a computer in the school's library.

The alleged victim, according to university police, also said Greene asked if he could come to her room.

Greene's June 8 primary victory stunned politicians in South Carolina because they had never heard of him and saw no proof he had mounted any type of campaign. His Democratic opponent, Vic Rawl, tried to have the election overturned, saying there were voting machine irregularities, but the state party denied the request.

The existence of the obscenity-related criminal charges didn't surface until after the primary win. State Democratic leaders called on Greene to step aside. He is believed to have little chance of running a serious campaign against incumbent Republican Sen. Jim DeMint.

Greene has remained tight-lipped regarding the obscenity charges.

"I'm innocent until proven guilty. ... I'm concentrating on my campaign issues: jobs, education and justice," he said in a recent interview. He refused to answer any more questions regarding the allegations.

The obscenity issue is one of several controversies swirling around Greene's long shot candidacy. Observers have also questioned how the 32-year-old nominee, who is believed to have very little personal wealth, was able to afford the $10,440 filing fee required to get his name on the Democratic Senate primary ballot.

South Carolina's top law enforcement agency said it determined that Greene used his own money to pay the fee, though the state attorney general's office said it did not receive a request from the agency to subpoena Greene's bank records.

Greene, according to records obtained by The Associated Press, was denied two promotions and made "mistakes as severe as uploading sensitive information improperly, and as basic as an overall inability to clearly express his thoughts and perform basic tasks."

The records cover three years of Greene's service in the Air Force.

Greene was discharged from the military in August 2009.

Greene recently attracted attention to his candidacy by proposing to create jobs in South Carolina by making "toys of me, especially for the holidays. Little dolls. Like maybe action dolls. Me in an Army uniform, Air Force uniform, and me in my suit."

CNN's Steve Brusk and Alan Silverleib contributed to this report