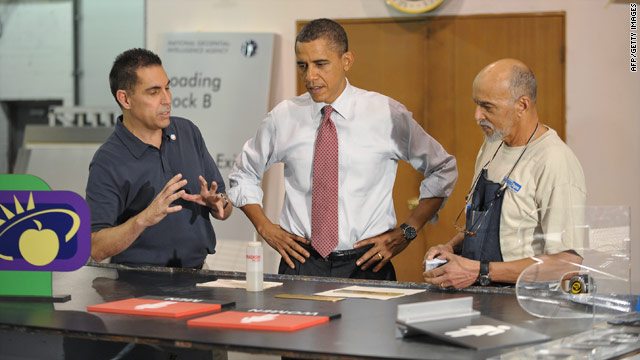 Washington (CNN) -- President Obama used an appearance at a small business in Washington to again call on Congress to pass small-business legislation that he says will help strengthen the American economy.

The Small Business Jobs and Credit Act is stalled in the Senate.

"It is so important to pass this jobs bill for America's small businesses. That's where most of our jobs are created. And small businesses have been especially hard-hit by the economy," said Obama, speaking at Gelberg Signs.

The bill would authorize the creation of a $30 billion lending fund. The Treasury Department would run the program, which would deliver ultra-cheap capital to community banks, defined as those with less than $10 billion in total assets.

It would offer a slew of tax cuts for small businesses, to encourage both investment and entrepreneurship. And the legislation would provide $1.5 billion in grants to state lending programs that can't turn to empty state coffers for more cash.

The president blasted the politics that has bogged the bill down. "A minority in the Senate is standing in the way to giving an up or down vote on the bill," he said. "Delays mean contracts being put off ... workers going without jobs. We need to do what's right, not what's political, right now. Democrats, Republicans, independents, we need to come together."

The president also commented on the newest job statistics, saying July was the seventh straight month of job creation. "Every month this year, we have added jobs instead of losing them, as in the first seven months of last year," he said.

The Labor Department released its monthly jobs report Friday. For the second month in a row, the U.S. economy lost jobs overall as government census jobs evaporated. But private sector jobs grew, although not as much as some economists had predicted.

The president highlighted other signs that the economy is building steam. "The manufacturing sector added 183,000 jobs this year, the most robust manufacturing growth in the past decade. Each of the Big Three automakers -- Ford, GM and Chrysler -- are all posting profits for first time since 2004. Since they emerged from bankruptcy, the auto industry as whole has added 76,000 jobs."

He acknowledged the recovery is slow. "Climbing out of any recession -- much less a hole as deep as this one -- takes time," he said. "Some sectors bounce back faster than others."

And he said, "Progress should come faster. We need to speed recovery to reach people, places who need it most."

The president praised the Senate for passing a bill that would "keep teachers in classrooms, and prevent state and local governments from having to fire essential personnel."

The Senate voted Thursday to send $26 billion more in federal aid to cash-strapped states. The measure contains about $16 billion in additional Medicaid money and $10 billion to prevent layoffs of teachers and first responders. It now moves to the House, which will return Tuesday from its August recess to vote on the bill.

"I will sign it into law," Obama said Friday.

Gelberg Signs is a small business in the District of Columbia that is hiring new workers, the White House said. It is expanding and making new investments in equipment and technology thanks to two Small Business Administration loans. It also has taken advantage of the HIRE Act, signed by Obama in March, which provides employers with a refund on payroll taxes paid on any unemployed worker they hire.

CNNMoney's Catherine Clifford and Tami Luhby contributed to this report.