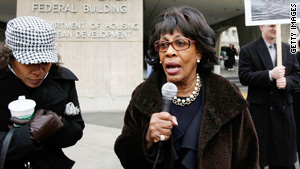 Rep. Maxine Waters says she wants the ethics charges made against her to be public.
STORY HIGHLIGHTS

(CNN) -- California Rep. Maxine Waters is pressing the House ethics panel to set her trial date before the midterm elections in November.

"I have made a very public request to come out with the formalized charges and to set up a meeting to hear them," she said Thursday in an interview with KCRW, a public radio station in Santa Monica, California.

The 10-term congresswoman is accused of violating House rules by seeking federal assistance for a bank with financial ties to her husband.

Waters is a senior member of the House Financial Services Committee.

According to Waters' 2008 financial disclosure statement -- as mentioned in the report -- her husband had two investments in OneUnited at the time of the meeting. They were valued between $500,000 and $1 million.

Waters, who represents the Watts section of Los Angeles, insists she did nothing wrong.

"I have not violated any House rules," she said in a statement Monday. "I simply will not be forced to admit to something I did not do."

Waters has asked The Committee on Standards of Official Conduct to make public the formal charges against her.

"All I know is that I have not been charged, that there has been a report that was released that said further investigation," Waters said. "Most people don't have a clue about what these charges are supposed to be and we're eager to get the information out."

The announcement this week by the ethics committee means Waters, 71, may now face a trial by committee members tasked with determining whether there is "clear and convincing evidence" she broke congressional rules.

Rangel, the former chairman of the tax-writing House Ways and Means Committee, has been accused of 13 violations of House rules involving alleged financial wrongdoing and harming the credibility of Congress.

Both trials could take place in September, only a few weeks before the midterm elections. The prospect of inquiries into two high-profile Democrats has compounded the fears of congressional Democrats nervous about their prospects in November.

"I think that there should be a process that works for everybody. It should be fair," Waters said. "People's due process should not be trampled on. I think it's unfortunate that these cases have been handled the way they've been handled."