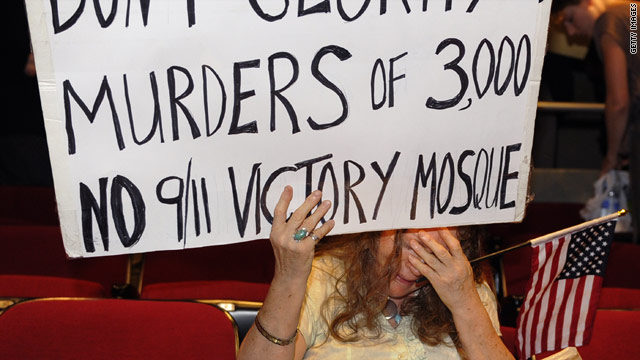 A protester in New York expresses opposition to plans for a mosque near "Ground Zero."
STORY HIGHLIGHTS

(CNN) -- America's Republicans are up-in-arms about a proposed building that is barely even a blueprint yet, because it will put a new mosque within walking distance of New York's Ground Zero.

"This is a desecration," said former mayor Rudy Giuliani, who led the city through the 9/11 attacks that destroyed the World Trade Center in 2001.

The mosque would be just one part of a 13-story Islamic community center originally named Cordoba House, after the Spanish city conquered by Muslim invaders and enriched by their heritage.

In the course of the growing controversy over the project and its reference to a vanquished city, it has now been officially re-titled Park 51, using to its street address on Park Avenue to set a more secular, neutral tone.

The change hasn't won much goodwill. New Yorkers say a mosque two blocks from the site of a terror attack by Islamic extremists that killed more than 2,700 people is a painful affront. Pollsters say a clear majority oppose it.

Influential Republicans from literally near and far, including former Alaska governor Sarah Palin and the former New York mayor, agree.

"Nobody would allow something like that at Pearl Harbor," Giuliani told a radio interviewer. "Let's have some respect for who died there and why they died there."

Prominent Democrats have largely avoided the argument and this week, White House Spokesman Robert Gibbs said "I think this is appropriately debated at another level."

But opposition, at whatever level, hasn't hindered the project. It took another step through the municipal planning process this week, with a unanimous 9-0 vote by local officials.

In fact, under the U.S. constitution's guarantees of religious freedom, New York officials say they had very little choice.

"If people want to build a house of worship they have a right to do it," current Mayor Michael Bloomberg said.

"This country is not built around state religion or only religions or clergy people we agree with. It's built around freedom."

It may still be a few years away, but it looks like the Muslims of Manhattan are going to get their mosque.