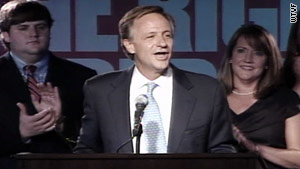 With 76 percent of the state's precincts in, AP reported Haslam had 48.2 percent of the vote as he defeated Congressman Zach Wamp and Lt. Gov. Ron Ramsey.

AP projected Stephen Fincher the winner in the 8th District Republican primary. Finch has 50 percent of the vote over Ron Kirkland at 24.6 percent and George Flinn at 22.2 percent. The race, for Rep. John Tanner's seat, is noteworthy because the Center for Responsible Politics has called it the most expensive House primary in the country,

Finch will face Roy Herron, the projected winner of the Democratic primary, in November AP projects him the winner in the Democratic 8th District Primary.