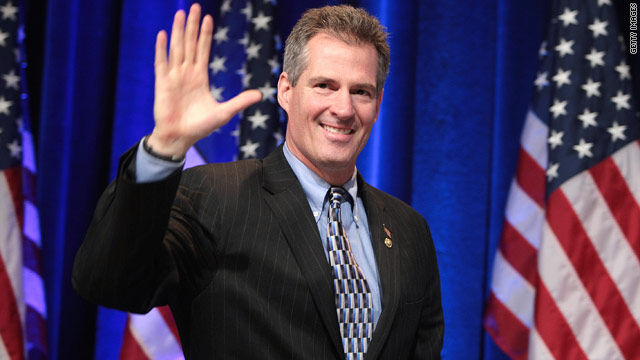 Massachusetts Sen. Scott Brown has gone from a little-known state senator to a key voice in the U.S. Senate.
STORY HIGHLIGHTS

(CNN) -- With midterms around the corner, Republican candidates are hoping Sen. Scott Brown's appeal will bring a boost to their campaigns.

In seven months, the Massachusetts native went from a little-known state senator to a key voice in the U.S. Senate and a hot commodity on the campaign trail.

"There is definitely a big demand for him," said Jennifer Nassour, chairman of the Massachusetts Republican Party. "He is our hometown hero. He did what everyone said was the impossible, and he did it through a lot of hard work."

The impossible was defeating Democrat Martha Coakley in a special election in January to fill the U.S. Senate seat formerly held by the late Ted Kennedy.

No Republican had won a U.S. Senate race in Massachusetts since 1972, and Democrats had control of the governorship, both houses of the state legislature, and the state's entire congressional delegation.

"Scott Brown is a superstar. Scott Brown won a race that nobody expected Republicans to even be competitive in, and he was able to do it at a time when nothing else going on, so he captured the attention of conservatives across the country," said Carl Forti, a GOP strategist and former communications director for the National Republican Congressional Committee.

Since his underdog win, Brown has had a hold on political and pop culture headlines. His victory made him the key 41st Republican vote in the Senate, putting an end to the Democrats' supermajority. But his independent streak has caught the eyes of Democrats, who see him as a gettable vote on some legislation.

Observers have also taken note of his looks, in a town known as the Hollywood for ugly people. The Hill, a daily publication that covers Washington, last week named Brown as one of the 50 most beautiful people on Capitol Hill. Much has been made of Brown's model past. Brown won Cosmopolitan Magazine's "America's Sexiest Man" contest in 1982 -- appearing nude in the pages of the women's magazine.

But Brown brings more than his looks to the campaign trail.

"He brings the crowds," said Nassour, noting he did the same as a state lawmaker, long before he was a household name.

"People would come to see him and hear him because he always spoke the truth and was honest. What he provided to everyone was a sense of what's real and not being a fake politician," she recalled.

Those crowds give candidates a chance to mingle with voters who might not have come had it not been for the big name. They also get additional exposure from the local media that cover the event, noted Republican pollster David Winston.

Brown is lending a hand to a handful of Massachusetts Republicans on the ballot this election season, many of whom he's developed close relationships with over the years.

Richard Ross, who won Brown's old seat in the state Senate, is getting a boost from Brown, as is Dan Winslow, Brown's former campaign lawyer who is running for the state House, Brown's office said.

Outside of his home state, Brown aided Rep. Charles Djou by sending out a fundraising letter during Djou's successful campaign in the special election for Hawaii's 1st District. He also stumped for Tim Burns, who lost a special election to fill the seat vacated by the late Democratic Rep. John Murtha in Pennsylvania.

He is able to connect with folks from all walks of life -- from the grassroots activist to the investment banker.
--Casey Werderman, campaign adviser for Rob Wittman

"He is able to connect with folks from all walks of life -- from the grassroots activist to the investment banker," he said.

"I was particularly grateful for his appearance at my event because it gave my campaign a needed financial boost as well as a good dose of inspiration. People want to meet him, and he is genuinely interested in hearing what they have to say," Loughlin said.

Donors want to meet famous people, and getting a high profile draw for a fundraiser is one way to boost both the crowd and the cash, said Forti.

"It's why the president and the vice president are always in demand," he said. "These folks are in demand because people around the country want to meet them."

"Scott Brown's next campaign is going to be very expensive. Appearing at these events helps to raise or maintain his high profile and introduces him to new groups of donors as well," Forti added.

As Brown's profile has risen, however, he's faced criticism from those hoping for a more conservative voice in the Senate.

The Tea Party Express spent hundreds of thousands of dollars on ads for Brown's campaign, but his breaks with Republicans on legislation such as the February jobs bill and the financial reform package has irked some Tea Party activists.

"If Senator Brown wants our continued support, he must consider how legislation he supports upholds these principles," the Greater Boston Tea Party said in a statement after Brown announced his support for the financial reform bill last month.

His Facebook page has also become a place for the disheartened to vent their frustrations.

Anybody who is perceived as not being beholden to the extremes of either party benefits enormously with voters.
--Tad Devine, Democratic strategist
RELATED TOPICS

"You have betrayed your country," one person wrote this week. "Are you really an independent or a conservative?" asked another.

Tad Devine, a Democratic strategist who was a senior adviser for Al Gore's and John Kerry's presidential campaigns, said while Brown's votes may have cost him with the hardcore base, they have made him more popular in Massachusetts.

"The reason for that is not his looks or his appeal or anything on the surface. It's because he has, on a few important occasions, broke from his party and done something with the Democrats to break a filibuster in the Senate," Devine said. "Anybody who is perceived as not being beholden to the extremes of either party benefits enormously with voters."

Good fortune can be fleeting in politics, but at least for now, Brown is still on top. A Boston Globe survey released in June found that Brown is more popular in Massachusetts than Kerry, the state's senior senator, and President Obama.

There's no telling how long Brown's star power will last, but according to Forti, "it's strong enough to last through at least November," and that's all the assurance candidates on the line need.