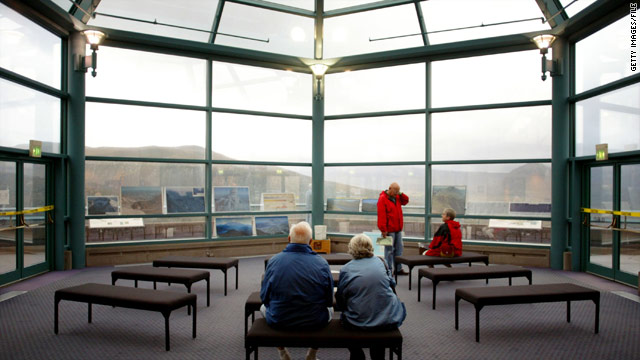 A visitor center at Mount St. Helens, seen in 2004, is now closed, but got new windows under a stimulus project.
STORY HIGHLIGHTS

Washington (CNN) -- Monkeys on cocaine. New windows for a closed visitor's center. Modern dance as a tool for software development.

A report released Tuesday by conservative Sens. Tom Coburn and John McCain cited these and 97 other projects as leading examples of misguided or wasteful spending under the Obama administration's $862 billion economic stimulus bill.

Titled "Summertime Blues," the report is the third by the two senators targeting projects that they say fail to meet the job-creation goal of spending under the Recovery Act of 2009.

The report highlights the extraordinary "waste and mismanagement" of taxpayer dollars, said McCain, R-Arizona. The stimulus plan "was supposed to create jobs. It does not."

The "American people have awakened to the incompetency of Washington," declared Coburn, R-Oklahoma. "The rest of the federal government is filled with stuff just like this."

Both senators conceded that the stimulus plan has had some positive effect on the economy, but insisted any benefit was due solely to the sheer size of the package, and that its effectiveness had been blunted due its poor design and spending choices.

Coburn complained the measure was full of projects that are "stupid or inappropriate," and fail to meet "the common sense test."

The plan failed to give "us the biggest bang for our buck," he asserted.

The Recovery Act, which was passed a few weeks after President Barack Obama took office, was a government-funded effort to kick-start economic activity in response to the ongoing recession.

It called for "shovel-ready" jobs -- from road and bridge repair and construction to scientific research and expanded broadband and wireless service -- through federal contracts, grants and loans, as well as helping state and local governments avoid layoffs and funding tax cuts.

The senators' report challenged the viability or effectiveness of specific projects across the country. However, the report's use of selected information from hundreds of footnoted sources left it unclear if the brief summaries of each project told the whole story.

In a previous report last January, the senators included the Napa Valley Wine Train as an example of wasteful stimulus spending without mentioning that the money was for a flood control project along the train's route, rather than the train itself.

The latest edition covered a broad range of projects including construction, research, development and conservation.

Topping the list was $554,763 spent for new windows at the Coldwater Ridge Visitor Center at Mount St. Helens in Washington state. The U.S. Forest Service facility opened in 1993 at a cost of $11.5 million to provide visitors with panoramic views of the scenic volcano.

However, it closed in 2007 due to staffing shortages, and now is getting the stimulus funds to replace its trademark windows in preparation for use for another purpose, according to information provided by the Forest Service.

"One government official likened it to 'keeping a vacant house in good repair,' while another official noted that there is hope to find some purpose for the building in the future, whether as a hotel, science camp or restaurant," the report said, attributing the information to a July 2009 article on tdn.com, a local news website.

"Despite those efforts, there are no plans to use the empty space."

The Forest Service information provided no timetable for the possible reopening of the visitors' center for another purpose.

"The Forest Service is now reviewing several proposals for how the facility could be used in the future through a variety of public-private partnerships, including a science facility, education camp, or an overnight lodge," the Forest Service document said.

Ranked second on the senators' list was a University of North Carolina at Charlotte project that received $762,372 in stimulus finds to develop a computerized choreography program, the report said.

Quoting a July 6 story posted on the Charlotte-based news website WCNC.com, the report said the project involves recording dancers on video, then logging and analyzing their movements.

"This will allow choreographers to explore the interactive dance without always having a full cast of dancers present," said the grant posted on the government's stimulus bill website, recovery.gov.

"The system will be extended into a Web-based 'Dance Tube' application that will allow the public to engage in interactive dance choreography," the grant goes on to say.

However, the senators' report initially failed to state the money was spread over three years. Again citing the WCNC.com story, it also initially said lead researcher Celine Latulipe "noted that her funding was severely restricted by the fact that the university is taking a 44 percent cut to cover 'overhead' expenses."

In reality the website story said: "The money is spread over three years and Latulipe points out the university takes 44 percent overhead."

After the discrepancy was pointed out by CNN, the report was changed, an aide to Coburn said.

In an interview with CNN, Latulipe said the project fit the kind of research and development work called for by the Recovery Act.

Through its application and further development, it could lead to audiences having an impact on performance by registering their reaction through handheld audience response devices, Latulipe said.

"We'll need to develop a bunch of different software packages that never existed before," she said, adding that project employs three students part-time over its three-year span and pays for dancers and other participants in what amounts to direct economic activity.

"I think it's sad that this research money that is really allowing innovation and funding students doing great research is being used as a political tool," Latulipe said.

Then there is the project listed at No. 28 by the senators -- $71,623 to researchers at Wake Forest University to see how monkeys react under the effects of cocaine.

Titled "Effect of Cocaine Self-Administration on Metabotropic Glutamate Systems," the project calls for monkeys to self-administer drugs while researchers monitor and study their glutamate levels, the report said.

It cited a March 8 Raleigh News and Observer article that quoted Wake Forest University School of Medicine spokesman Mark Wright as saying the stimulus money would allow the university to continue a job that otherwise might have been cut.

Paula Faria, assistant vice president for media relations at Wake Forest University Baptist Medical Center, said the grant will "have significant impact on public health in regards to cocaine addiction and the issue of relapse."

"It's also important to note that the applications for these grants are peer reviewed and this study was deemed of merit by a panel of scientific experts, and then reviewed by the National Advisory Council on Drug Abuse before funds were awarded," Faria said in a statement to CNN.

Liz Oxhorn, the White House spokesperson for the Recovery Act, called the senators' report a partisan effort intended to undermine the overall success of the Recovery Act.

According to Oxhorn, new research shows stimulus money is responsible for nearly 3 million jobs and has lowered unemployment by 1.5 percent.

"We'll look into each of their claims and take action if any have merit, but with more than 70,000 Recovery Act projects underway, any misguided project is just a small fraction of tens of thousands coast to coast that are rebuilding America and putting people to work," Oxhorn said.